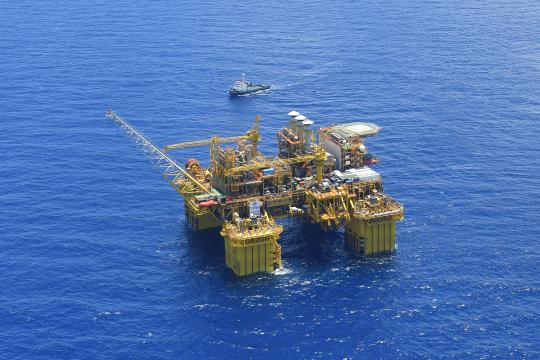 The domestically designed platform aims to tap into the gas reserve 1,500 meters beneath the ocean surface. This single rig can produce about 3 billion cubic meters of natural gas per year, roughly 1.6 percent of China's total gas output last year, according to China National Offshore Oil Corporation.

Analysts hailed the launch of the 40-story behemoth as a new milestone in China's maritime resource development. Shenhai Yihao, or Deep Sea No 1, is the culmination of nearly two decades of deep-sea engineering ingenuity and has made China one of the few nations able to extract oil and gas with only domestically made equipment.

In a speech addressing China's top scientists and engineers in late May, President Xi Jinping urged the Chinese scientific community to break new ground in four strategic frontiers, one of which is the ocean.

Xi has been emphasizing the need to study the seas since 2013, when he uttered the famous phrase "Care about the ocean, understand the ocean, and strategically manage the ocean".

Wang Pinxian, a prominent marine geologist and an academician of the Chinese Academy of Sciences, said deep-sea exploration can yield data on matters such as climate change and weather forecasts and can uncover resources including fossil fuels and minerals.

About three-fifths of Earth is covered by water with an average depth of over 2,000 meters, he said in a People's Daily article last year.

"The deep sea is also the home of greenhouse gases and is a major factor in long-term climate change. If we wish to know more about Earth, we have to probe the ocean", Wang said.

On the economic front, nearly 70 percent of newly discovered oil and gas reserves are buried more than a kilometer underwater, he added.

"The bottom of the sea holds a treasure trove of resources, but humanity has only barely tapped into them."

The diving is done by manned and automated submersibles that can reach the seafloor. The drilling requires equipment that can penetrate the ocean basin. As for networks, underwater installations, cables and detectors are put in place to continuously monitor the sea floor.

China's rapid rise in deep-sea exploration in recent years is due to it making major breakthroughs in all three fields, Wang said.

With this feat, China became one of few countries to achieve "full ocean depth capability", meaning it can carry out routine manned expeditions at any ocean depth, said Yang Rui, the scientist responsible for creating the vehicle's cabin and a researcher at the Institute of Metal Research of the Chinese Academy of Sciences.

Since the mid 20th century, scientists around the world have been going on ocean drilling expeditions from the Arctic to Antarctica. In 1998, China joined the Ocean Drilling Program, an international organization dedicated to conducting basic research on the ocean floor.

Although a latecomer to the field, China successfully extracted 5,500 meters of ocean basin sediment core samples from the South China Sea in 1999, the first samples of their kind from the region, according to the National Institute for South China Sea Studies.

The samples revealed key insights on the climate and geological formation of the region over 30 million years ago. Now, China is an active member of the International Ocean Discovery Program, the largest international scientific ocean drilling initiative with over 20 member countries.

In June, the Institute of Oceanology of the CAS reported it had successfully deployed an underwater experimental platform on the ocean floor capable of storing and studying deep-sea creatures.

Wang Minxiao, an associate researcher at the institute, said when the creatures are brought to the surface, the sudden change in pressure, temperature and chemical environment will often alter their physiological characteristics. So a lab on the ocean floor allows for a more accurate examination of deep-sea life under extreme conditions.