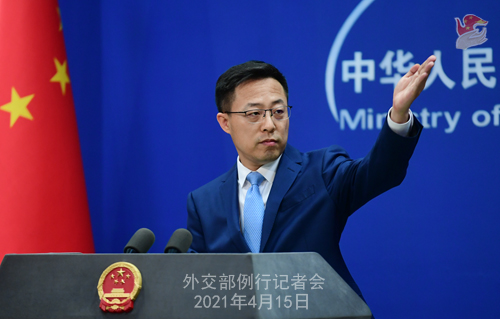 Beijing expressed dissatisfaction and opposition on Tuesday to a G7 statement that deliberately slanders China over issues including Hong Kong, Xinjiang and Taiwan affairs, urging G7 countries not to interfere in China's internal affairs.

Zhao Lijian, spokesman of the Foreign Ministry, said at a daily news conference that China-related contents in the "2021 G7 Leaders' communique: Our shared agenda for global action to build back better" have exposed the malicious intention of the United States and some other countries to artificially create confrontation and exaggerate differences.

It violated the purposes and principles of the UN Charter and the trend of peaceful development and win-win cooperation, Zhao said.

Affairs relating to the Xinjiang Uygur autonomous region, the Hong Kong Special Administrative Region and Taiwan are China's domestic affairs that brook no external interference, he said, adding that China is firmly committed to safeguarding its national sovereignty, security and development interests.

"Gone are the days when a single country or one group of countries can dictate to the whole world," he said, adding that unity and cooperation are needed now more than ever for the international community.

Zhao called for practicing true multilateralism, saying, "There should be no bloc politics based on cliques or suppression of different development models based on ideology, and no one should confuse right and wrong to shift blame."

"The United States is very ill indeed－the G7 had better take its pulse and come up with a prescription," he said.

The G7 communique, released on Sunday, scolded Beijing over a range of issues, such as human rights in Xinjiang and situations in the Taiwan Straits and the East and South China Seas.