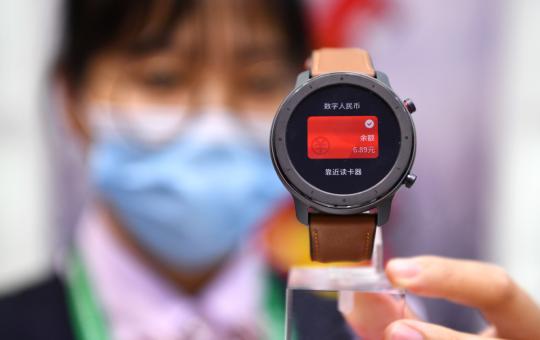 A payment terminal for digital RMB is exhibited at the China International Consumer Products Expo in Haikou, Hainan province. [Photo/Xinhua]

After winning a prize in Beijing's lottery-based digital renminbi program, Tao Siyu couldn't wait to invite his friends for a celebratory meal.

"I did not win a digital RMB red envelope in February, and I felt sad for missing a chance to experience (the new payment system)," Tao said while footing the bill using the lucky money. "Once I got notified that I was a winner this time, I invited my friends to dine and share the joy."

In the latest public trial run of e-CNY, China's digital legal tender, Beijing, with a population of around 22 million, handed out 40 million yuan ($6.25 million) in digital currency to consumers in 200,000 digital red envelopes, each containing 200 yuan.

The lucky draw results were announced on Friday, the eve of the three-day Dragon Boat Festival holiday, as a travel and spending boom was expected during the festival. The digital yuan can be used in nearly 2,000 businesses around Beijing, indicating wider acceptance.

Lottery winners need to download the mobile app for the digital RMB to get online wallets. They also need to spend the money by Sunday.

Back in February, Beijing started with 10 million yuan worth of digital yuan giveaways to local residents in a bid to boost consumption during the Spring Festival holiday. These giveaways were also distributed through a lottery of virtual red envelopes, or hongbao, a traditional Chinese practice of gifting money.

More and more consumers are signing up for the digital yuan, which promises to make daily life easier and digital payments more secure.

The financial hub of Shanghai doled out 350,000 virtual hongbao before the Dragon Boat Festival. A student from Donghua University, identified by his surname as Ding, said that he and two of his roommates all won a hongbao each and spent them in the city's busiest commercial districts.

"I saw many people ask if digital RMB payments are entitled to special discounts," Ding said.

In Shanghai's Zhujiajiao ancient town, a popular tourist destination, stores including those selling the festival delicacy of Zongzi, a pyramid-shaped glutinous rice dumpling wrapped in reed leaves, have put up "Pay with Digital RMB "signs.

A merchant surnamed Pan said that she could sell up to 4,000 Zongzi a day during the Dragon Boat Festival holiday, and many of the orders were paid via the digital yuan that is convenient and free of transaction commissions.

China is aiming to upgrade its domestic retail system by further developing its digital currency. Gradual steps will expand its use via trials, according to the country's monetary authorities and experts.

The country began piloting the digital currency in select regions at the end of 2019. The currency is expected to be issued by the country's central bank and legally backed by the government as an alternative to paper money.

During the pilot programs in cities including Beijing, Shenzhen, and Suzhou, Jiangsu province, businesses such as groceries, daily necessities, and catering, among others, already supported payments using the digital yuan.

As the digital RMB pilot program expands its scope in public life, China is expected to enrich its operational experience to pave the way for large-scale adoption in small-scale and high-frequency retail business scenarios, according to experts.