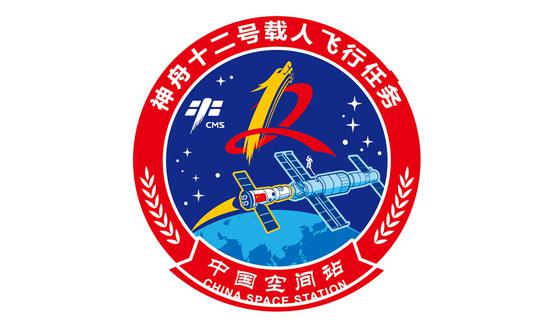 The logo shows the Shenzhou-12 manned spacecraft docking with the Tianhe core module and Tianzhou-2 cargo spacecraft, with the three forming a linear structure in orbit right above Earth.

The number 12 is also seen in the logo next to the CMS logo.

Scheduled for June, the mission will be the third of 11 flight missions scheduled from late April until 2022 in China's station construction phase.

The combination of the Long March-2F Y12 and the Shenzhou-12 manned spacecraft have been vertically transferred to the launch pad, the agency announced on June 9.

Chinese space authorities have yet to announce the line-up of the first three-strong flight crews, but Yang Liwei, the country's first astronaut and director of China Manned Space Engineering Office, revealed that they were chosen from China's first and second batch of astronauts, and are currently under Level-2 quarantine, with all related work having entered the final stage.

The astronauts will stay in orbit for three months, during which they will conduct multiple tasks in and out of the cabin, including repair and maintenance, appliance switch and scientific operation of payloads, Yang explained.

It will be the first time in nearly five years that China has sent men into space, and is the first crewed flight mission and third leg of the country's total 11 space launch missions of the intensive space station construction phase.

China sent the space station's Tianhe core cabin module via Long March-5B carrier rocket on April 29, and the Tianzhou-2 cargo spacecraft via Long March-7 on May 29.