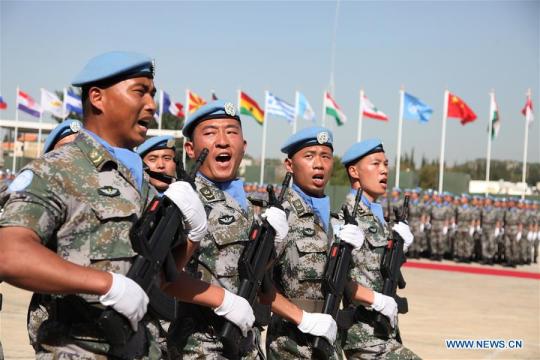 Chinese peacekeepers to Lebanon parade at a medal-awarding ceremony at a camp in southern Lebanon, on April 6, 2018. (Photo/Xinhua)

Despite China's considerable contributions to United Nations peacekeeping, some foreign analysts downplay their significance, claiming its participation in peacekeeping is largely driven by a long list of pragmatic needs or interests, ranging from access to natural resources to reshaping the world order.

From small beginning to great contributions

China is also the second-largest contributor to UN's peacekeeping budget, accounting for 15.22 percent of about $7 billion in 2019, up from 10.28 percent in 2018. Also, China's assessment rate in terms of contribution to peacekeeping is higher than those of the other permanent Security Council members.

Given the uncertainties over the safety and security of peacekeepers on African missions, many developed countries are reluctant to send their military personnel to Africa.

As the world's second-largest economy and a permanent UN Security Council member, China's pro-peacekeeping policy accords with its peaceful diplomacy. There are three core reasons behind China's strong support for UN peacekeeping: strengthening the UN and multilateralism, acting as a responsible country, and sharing common concerns of maintaining global peace and security.

Strengthening the UN and multilateralism

The UN is the largest and universal representative and authoritative inter-governmental organization in the world. And strong UN is in the interest of not only China but also the rest of the world. Therefore, China is committed to defending the UN's authority, promoting multilateralism, and opposing the unilateralism practiced by some Western powers.

China's rapid economic and social development has been lauded by many countries, but it has also become a source of unease for some.

But the fact is that China's peaceful rise needs a peaceful international environment, which is a major reason for China promoting peaceful diplomacy and supporting the UN to maintain global peace and security. As the largest exporter of manufactured goods and the largest importer of raw materials, China's prosperity depends heavily on overseas markets.

Besides, more and more Chinese enterprises and individuals are doing business abroad, including in places vulnerable to conflicts. China can feel the impact of conflict and instability even in a remote corner of the world.

In 2011, for instance, Libya fell into chaos overnight due partly to foreign intervention, and China had to use all means at its disposal to evacuate more than 50,000 Chinese nationals from that country. Still, Chinese enterprises lost commercial contracts worth billions of dollars signed with the former Muammar Gadhafi government.

The essence of the UN system is multilateralism and diversity. Every UN member state, including China, has the obligation to help improve the peacekeeping regime so that regional and global challenges can be overcome and international peace and security maintained. China's peaceful rise is different from the violent rise of Western powers in the past, and carries many valuable lessons for the world.

As China plays an increasingly active role in reforming and improving the global governance system, the UN peacekeeping mechanism will greatly benefit from Chinese resources and wisdom.

In other words, in the future, China will contribute not only personnel and budget, but also "Chinese approaches" to peacekeeping.

In recent years, the peacekeeping mechanism has encountered unprecedented challenges. The UN has repeatedly reminded member states that a number of peacekeeping operations are being carried out in highly volatile places, and the strain on the UN's operational capability and support system is showing.

China's contribution to UN peacekeeping is not an attempt to change the peacekeeping system; on the contrary, it is to strengthen and sustain it.

Nevertheless, as its strong support for UN peacekeeping shows, China is determined to shoulder its global responsibilities. And with the United States retreating from the international organizations, China's efforts to strengthen the UN system and other global and multilateral bodies will help strengthen and sustain the world order.

The author is a board member of the United Nations Association of China and an associate professor at the China Peacekeeping Police Training Center, Chinese People's Police University. The views don't necessarily represent those of China Daily.