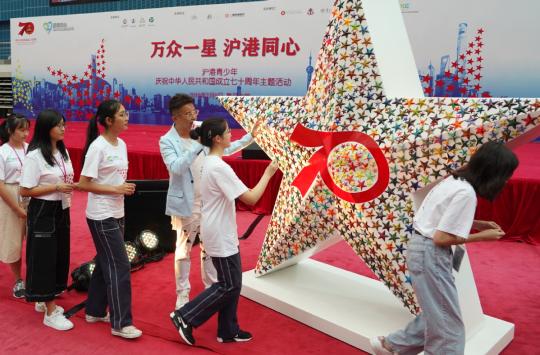 Students from Shanghai and Hong Kong create graffiti on star-shaped artwork made from fiber-reinforced plastic to celebrate the 70th anniversary of the founding of the People's Republic of China in October this year. (Photo by GAO ERQIANG/CHINA DAILY)

Students also visited science and technology enterprises and innovation parks in Shanghai and learned about Chinese traditional culture and art forms such as calligraphy, shadow play and pottery.

"It's impressive that Shanghai is such an inclusive and open city with a proper mix of modern and traditional culture, as there are many well-preserved historic sites along with skyscrapers," said Sun Yuen-ki, a Form 4 student from Tung Wah Group of Hospitals S. C. Gaw Memorial College.

"While walking along the street, we saw how clean the city is, which shows the effort that the city puts into greening and environmental protection," said Sun, who was visiting Shanghai for the first time. "I am grateful to have the opportunity to come here."

Wong Chuek-fung, a Form 5 student from Chinese YMCA Secondary School, said the visit to a manufacturing factory where guqin - one of China's oldest plucked string instruments, also known as a seven-stringed lyre - are made was one of his favorites. He said the trip allowed him to learn about this instrument and he was happy to be included.

"I love playing piano in Hong Kong and now I am also interested in this traditional Chinese instrument," he said. "I am amazed by the refined and delicate sound it gives off."

Students from Shanghai and Hong Kong also created graffiti on star-shaped artwork made from fiber-reinforced plastic during the program.