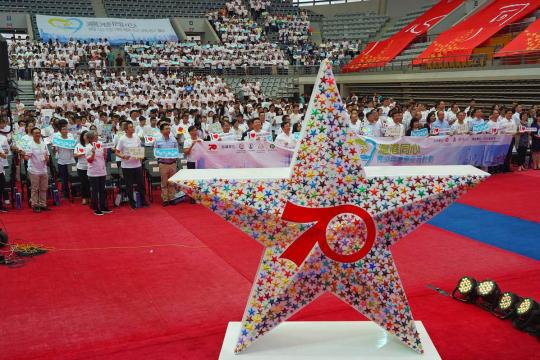 Students from Shanghai and Hong Kong create graffiti on star-shaped artwork made from fiber-reinforced plastic to celebrate the 70th anniversary of the founding of the People's Republic of China in October this year. (Photo by GAO ERQIANG/CHINA DAILY)

"This part is designed to celebrate the 70th anniversary of the founding of the People's Republic of China in October this year, as stars are featured on the national flags of the country," said Mak Takchuen, vice-president of the Hong Kong-Shanghai Economic Development Association.

"It also represents students who are the 'future stars' that can contribute to the country's development," added Mak, who is also the chief leader of all the students.

Mak said some artwork will be in Shanghai and may be shown to the public at exhibitions during the celebration of the National Day in October.

Shanghai and Hong Kong students will keep the rest, "representing the close relationship between the young generations in Hong Kong and Chinese mainland".

"Many Hong Kong students exchanged their contact number with local ones. We are glad to see that they have become friends already," Mak said.

According to Yao, programs may be launched next year to welcome Shanghai students to visit Hong Kong.