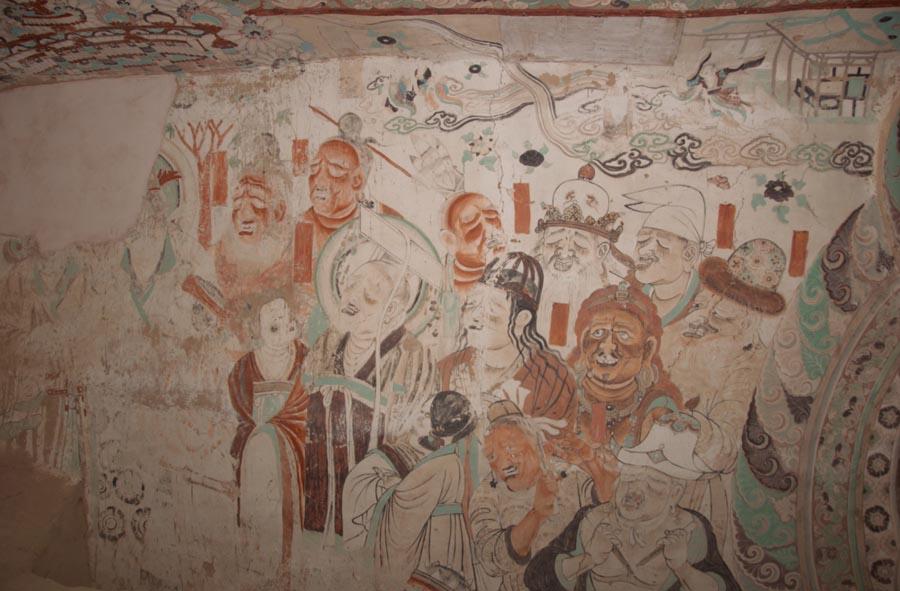 A mural in Cave 158 at the Mogao Grottoes from the Tubo period, located in Dunhuang, Gansu province, shows princes of different countries mourning for nirvana of the Buddha. (Photo provided to China Daily)

A major exhibition examining the pivotal role played by the Tibetan Tubo regime in the Silk Road era is breaking new ground.

When you mention the ancient Silk Road to most people, they usually think of the Eurasian trade routes spreading from Chang'an, today's Xi'an and the capital of Shaanxi province, toward Central Asia out through the deserts of Northwest China.

Dunhuang, Gansu province, served as a pivotal crossroads on this network of routes for over a millennium. It's also an ideal place to gain an insight into the prosperity that those trade routes brought when you visit the nearby Mogao Grottoes. This complex of hundreds of caves features a host of exquisite statues and murals in a mix of artistic styles from a diverse range of civilizations.

A major new exhibition of cultural relics held in Dunhuang will remind visitors that the Silk Road extended to a much wider area than first believed, covering the Qinghai-Tibet Plateau and all the way up to the Himalayas.

This is the story being told through the 120 or so artifacts on loan from 30 institutions and collectors worldwide at Cultural Exchange Along the Silk Road: Masterpieces of the Tubo Period (7th-9th Century), a show currently being held at the Dunhuang Caves exhibition hall at the foot of the Mogao Grottoes.

The Tibetan Tubo regime was an approximate contemporary of the Tang Dynasty (618-907) and a powerful regime which united the peoples of the Qinghai-Tibet Plateau. 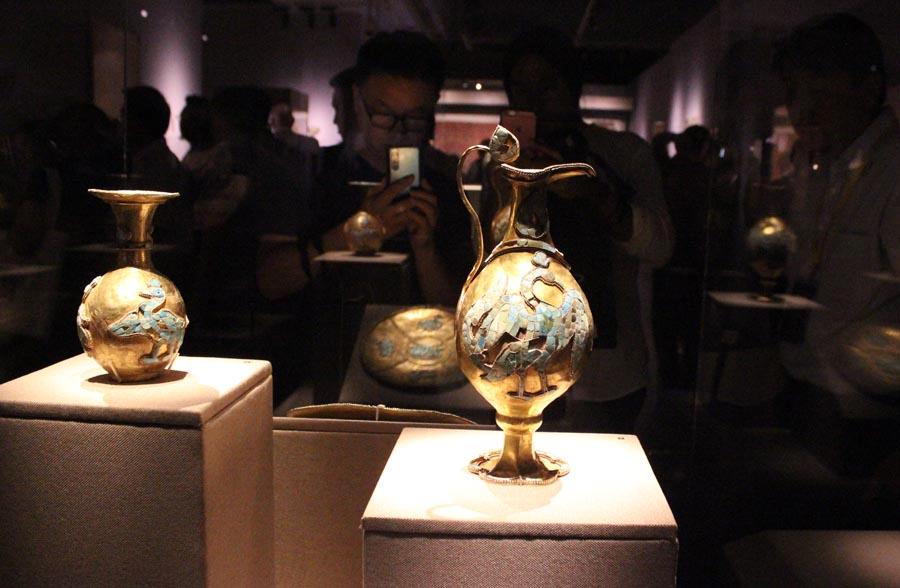 A set of gold ewer, decanter and plate, which are decorated with turquoise. (Photo provided to China Daily)

Jointly organized by the Dunhuang Academy, the research and management institution of the Mogao Grottoes and the Chicago-based Pritzker Art Collaborative, the exhibition opened last week and will run until Oct 22.

According to David Pritzker, co-curator of the exhibition, the event aims to display only the highest quality objects, both in terms of aesthetics and historical importance, to reflect the cultural interactions between the Tubo regime and its neighboring regions.

"To start with beauty is the best way to draw the general public into history," the curator says.

The exhibition hall is a glittering world. A burial mask with engraved animals, a figurine of a rider on horseback, a brooch inset with turquoise, amethyst and aquamarine－all made of gold－all demonstrate, not just the prosperity of that ancient era on the plateau, but its different facets.

Gilded silver ornamental artifacts provide one of the highlights of the exhibition. Six pieces depicting celestial deities playing Chinese lutes remind visitors of the popularity of music at that time, while an arched plaque also tells people of the Tubo people's admiration for the phoenix.

The daily life of the Tubo people is portrayed through a hunting scene on painted lacquer arrow quiver, a child's silk garment and horse-riding gear.

"When people talk about the Silk Road, it is largely about the East-West connection, yet little is said about the influence of Tubo on the Silk Road, since its timespan is relatively short," Pritzker says. "However, its role is important." 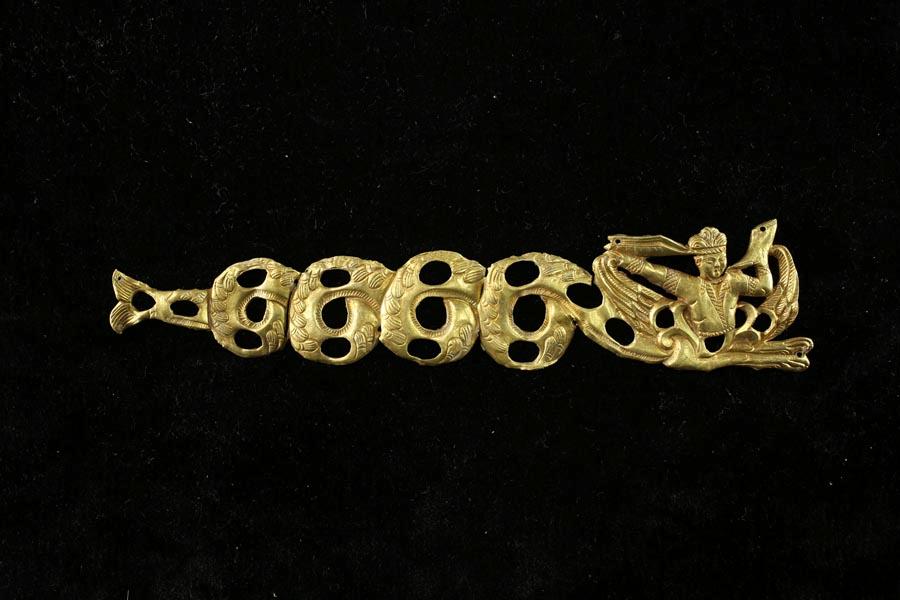 A gold plaque depicting a merman-type character, unearthed from a Tubo graveyard in Dulan county, Qinghai province, is among exhibits about the Tubo regime at an ongoing show in Dunhuang. (Photo provided to China Daily)

During its peak, the Tubo regime also controlled the oases in the Taklamakan Desert, located in today's Xinjiang Uygur autonomous region, as well as certain areas of Central Asia.

Dunhuang was also ruled by the regime from 781 to 848, when 56 caves were carved out at the Mogao Grottoes－with Cave 158 being the most representative of them. A large number of documents written in the Tibetan language were left behind during this period, according to Zhao Shengliang, director of Dunhuang Academy.

"The exhibition is not only about the origins and development of the Tubo regime," Zhao says. "It also provides a platform to show the mutual influences between the different cultures along the Silk Road."

Consequently, the exhibition presents a much bigger picture through its kaleidoscopic variety of exhibits, spanning from sancai, the three-color glazed earthenware figurines from the Tang Dynasty, to a silver dish featuring a royal banquet scene from the Sogdian people, an ancient ethnic group living in Central Asia who acted as middlemen along Eurasian trade networks. 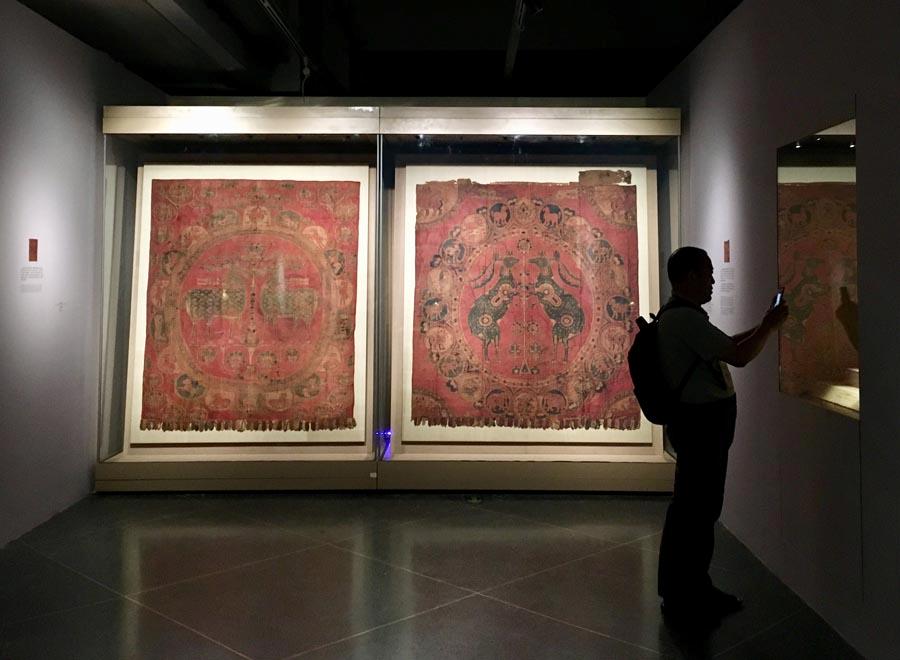 A pair of Central Asian hanging silk brocade at the exhibition. (Photo provided to China Daily)

A gilded silver wine rhyton in the form of an antelope's head demonstrates the aesthetics of the Sasanian Empire (224-651), located in today's Iran. A gilded bronze standing Buddha bearing strong Greek influences is believed to have originated in what is currently Kashmir.

Six ewers from the period reflect the common influences shared across the different cultures along the Silk Road, and one of them, a 50-centimeter-tall gold ewer, represents a tasteful blend of their styles. It is believed to have been made by the Sogdian people for a customer looking for a piece that combined Tang, Sasanian and Central Asian influences.

"When you put them side by side, you can see their shared cultural influences, since they employ similar shapes and images," Pritzker says. "Patterns similar to the ones found on the ewers can be seen in some of the silk pieces on display. Some similar images can also be found in Cave 158.

"They are closely related, but this is the first time that they can be seen together," he adds. 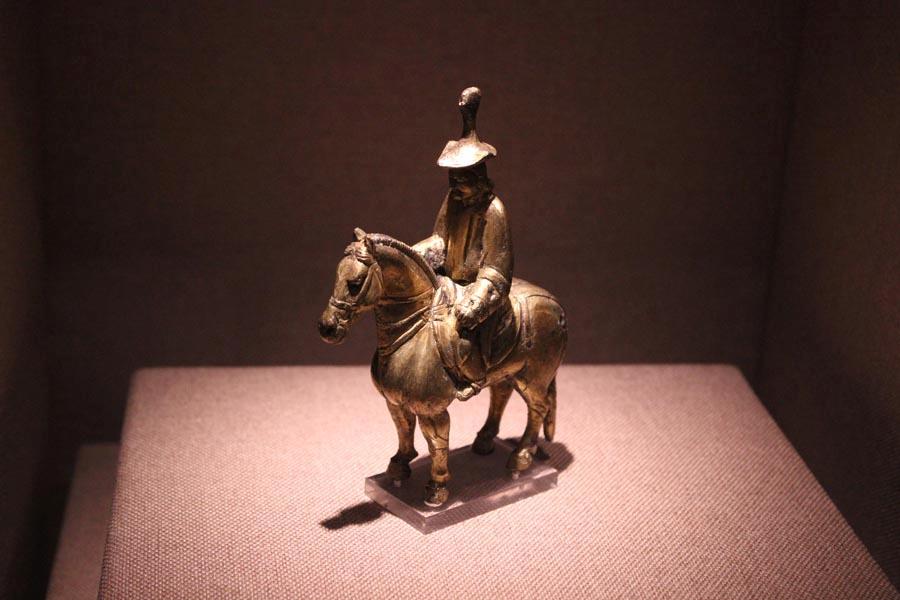 According to Huo Wei, an archaeology professor from Chengdu-based Sichuan University, the rising power of the Tubo regime in the latter half of the 9th century enabled it to build up a huge network of trade routes connecting it with the rest of China, South Asia and Central Asia.

"The Tubo people introduced Buddhist art from the Tang regions and what was today's Nepal, along with techniques in craftsmanship for making gold and silver artifacts from Persia," Huo explains. "It amassed a huge number of silk pieces through trade, despite the fact that Tubo people never learned how to make silk, probably due to the restrictions within their natural environment.

"We like to refer to it as the Silk Road on the Plateau," he explains. "It was an indispensable part of the ancient Silk Road."

Pritzker says: "Studies of Tibetan culture around the world have largely been influenced by the dominance of Buddhism, and it tends to overshadow other aspects. Nowadays, we are starting to understand the importance of the cultural exchanges that went beyond religion."

Nevertheless, he also points out that studies into Tubo culture are still at an early stage.

"We've only revealed the tip of the iceberg," he says. "This exhibition is not so much designed to come up with answers, but rather to raise more questions."

From his point of view, further achievements in the field will require more solid support from archaeologists.

In recent years, studies of the Reshui site, a Tubo graveyard in Dulan county, Qinghai province, have offered scholars a clearer picture of the communication between Tang and Tubo peoples. Gold plaques unearthed from the site are also on show at the exhibition in Dunhuang, according to Luo Wenhua, a researcher from the Palace Museum in Beijing and also one of the curators of the exhibition.

By comparison, studies of burial sites in Ngari offer a more global perspective through its links with other civilizations outside of China.

"However, these regions are on the frontiers of the Tubo regime," Luo says. "Details of the rulers' lives still largely remain a mystery due to a lack of archaeological evidence.

"It's interesting for David and I to discuss where the exhibits first originated," he says. "That will trigger a great deal of inspiration for joint studies." 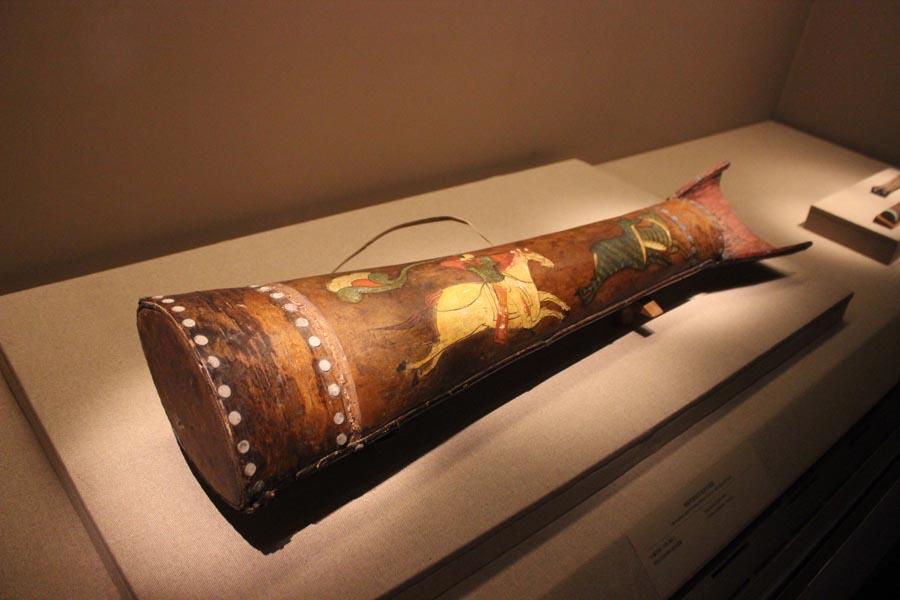 A wood quiver painted with a hunting scene show frequent communication between Tubo and other regions on the Silk Road. (Photo provided to China Daily)

Pritzker, 36, who received his PhD from the University of Oxford with a focus on the early textual history of Tibet, first came to the mountains of the Himalayas at just 4 years old. With his parents, he spent a large part of his childhood living in Nepal.

For him, this exhibition represents a long-held family dream that has finally come true.

The Pritzker family from Chicago is famed for its achievements in entrepreneurship and philanthropy. It funds the Pritzker Architecture Prize, one of the world's leading architecture awards.

David's parents Thomas and Margot Pritzker first came to the Himalayas in 1975 and soon became "addicted" to the place. Since then, the couple has made frequent treks through the mountain ranges there. They first visited the Tibet autonomous region in 1981.

"When we started, the (ancient) Greek and Roman cultures and Renaissance were really well understood in the West, and there was no new ground to be broken," Thomas Pritzker, 69, tells China Daily.

"But here we discovered a lot of new ground to cover," he says. "Tubo studies were in their infancy then, and we could do things that are really exciting."

Thomas Pritzker began to work with the National Cultural Heritage Administration and Sichuan University in 1996 and he later published a series of relevant academic papers following research in the west of Tibet. His son David also nurtured his passion for archaeology during that time.

"One step follows the other, and we've kept going," he smiles. "We're still 'amateurs', but it's good to see David turn into a real professional." 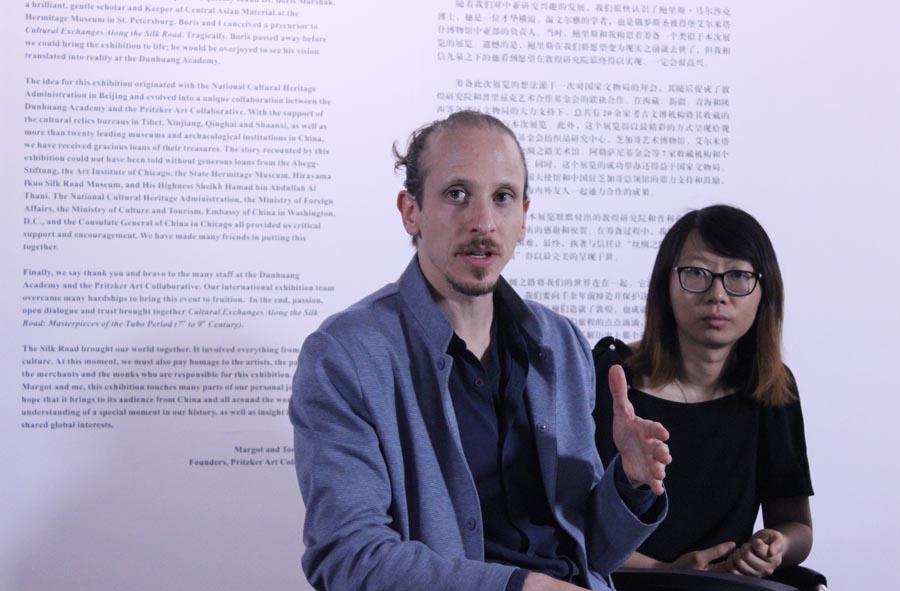 In 2017, when he was asked by the National Cultural Heritage Administration if he would consider exhibiting his family collection in China, he agreed.

His sentiment was echoed by Wang Xudong, the then director of the Dunhuang Academy, who spent over a year contacting institutions abroad and around China to contribute to the exhibition.

The Pritzker Art Collaborative brought 35 artifacts to the exhibition in Dunhuang. It is joined by key Chinese institutions, such as the National Museum of China, the Palace Museum and the Shaanxi History Museum in Xi'an, as well as several other major overseas collections, including the Al Thani Collection owned by the Qatari ruling family, the State Hermitage Museum in St. Petersburg, and Hirayama Ikuo Silk Road Museum in Japan.

Abegg-Stiftung, a Swiss collection that mainly features textiles, dropped its "zero loan policy" for the exhibition, opting in favor of cultural exchange and supplying 16 artifacts to the exhibition.

A hanging brocade with roundel featuring a pair of stags locking horns, on loan from Abegg-Stiftung, is one of the most important exhibits on display. It is believed to have been hung as decoration in the tents of Tubo nobles as a symbol of power.

"The Silk Road carries a message for all of us today," Thomas Pritzker says. "The world will always have problems ... Yet each culture has its own history and values, which are unique.

"If we learn more about another country's culture, it will be easier to find ways to solve these problems," he says.