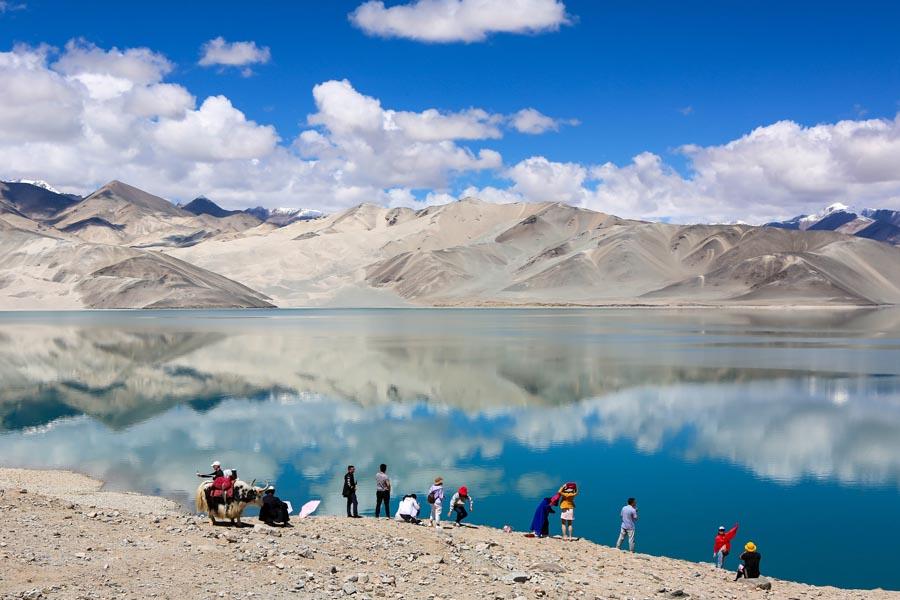 Visitors are flocking to the far northwest, attracted by the stunning scenery and ancient culture.

This is the seventh in a series of stories focusing on the Xinjiang Uygur autonomous region, looking at developments in the economy, the cultural and business sectors, and poverty alleviation measures.

Zhang Saxia, who owns a juice and tea bar in Kashgar city, Xinjiang Uygur autonomous region, became hooked on the exotic city after paying an unscheduled visit in August 2017.

"My original plan was to travel around the region's northern areas to view the marvelous landscape, because several people close to me had warned that security in some of the southern cities was not very good, and that deterred me at the very beginning," said the Sichuan province native with a laugh.

"But curiosity won out. Kashgar was a total surprise to me when I arrived because what I saw was a strong exotic culture and friendly people. There was no hint of terrorism. Everything was novel to me at the time," the 27-year-old said.

After returning to Chengdu, Sichuan's capital, Zhang found herself yearning for the slower pace of life in Kashgar, so she quit her job and opened her bar early last year.

"Kashgar is famous for its mouthwatering fruit, while the cities in the region's interior are known for their fine teas, so I combined the two, hoping to bring a new taste to local people and travelers," she said. 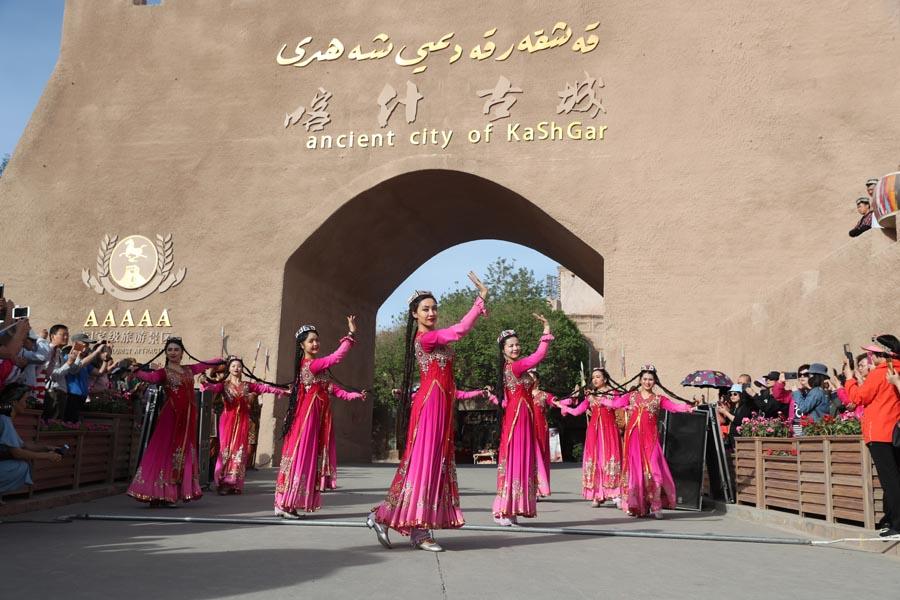 Women dance during a welcoming ceremony in front of the gate of the ancient city of Kashgar. (PHOTO/CHINA DAILY)

Located on Xinjiang's western rim, Kashgar prefecture boasts rich tourism resources in terms of nature and culture, ranging from the Pamir Plateau to the Muztagh Ata, a snow-covered mountain range in Tashikurgan Tajik autonomous county. Meanwhile, the Old City in Kashgar city has a history of 2,000 years and a vibrant culture.

These resources have revitalized the prefecture, and the deepened cooperation between China and countries involved in the Belt and Road Initiative, along with the stable, secure society and rapidly improving travel services, have made it a new attraction for tourists.

Last year, tourism boomed in the prefecture, with the number of visits reaching 9.3 million, a rise of 54 percent year-on-year. The sector generated revenue of more than 9 billion yuan ($1.3 billion), a rise of 67 percent from 2017, according to the Kashgar Bureau of Culture and Tourism.

Gao Zhenduo, president of Kashgar Kunlun Travel Agency, who has worked in the sector for about 20 years, said the prefecture has a promising future, thanks to the development of tourism.

His company organized about 100,000 visits last year, while the first half of this year saw tourist numbers rise by 10 percent from the same period in 2018.

"Travelers have a wide range of choices here; the plateau, the snowy mountains and the night fairs with their delicious snacks," he said. "However, the tourists we've helped preferred Kashgar's Old City."

Local musicians perform for tourists in the Old City. (PHOTO/XINHUA)

Zhang, the juice and tea bar owner, said, "The area has many beautiful places, but for me, and I believe many tourists, the Old City is the most attractive place because of its strong, exotic culture. I think it owns the city's soul."

A document released by the prefectural government said the Old City, which covers about 5 square kilometers, is booming after a renovation program started in 2010, which saw the construction of houses designed to withstand earthquakes and obsolete firefighting equipment replaced with modern tools.

According to the document, the central and regional governments provided more than 7 billion yuan for the renovation project, which was completed in 2015, in time for the region's 60th anniversary celebrations.

In a 2015 interview with Xinhua News Agency, Zeng Cun, who was governor of Kashgar in 2010, said the Old City is located in an active seismic zone and its dense population and old, unstable houses could hamper rescue work in the event of an earthquake.

Also in 2015, Anwar Tursun, mayor of Kashgar city at the time, told Xinhua that the renovation project combined the protection of cultural relics and the development of tourism across an area of 4.46 sq km.

He added that the traditional culture will be preserved by the development of tourism, while the rising number of people who visit to experience the local culture will bring higher incomes for both residents and the government.

The Old City－which the China Tourism Administration designated as a Five-A tourist attraction, the highest grade, in 2015－is now a burgeoning commercial area, where residents have opened souvenir stalls in their spare rooms, and is a new landmark for Kashgar. 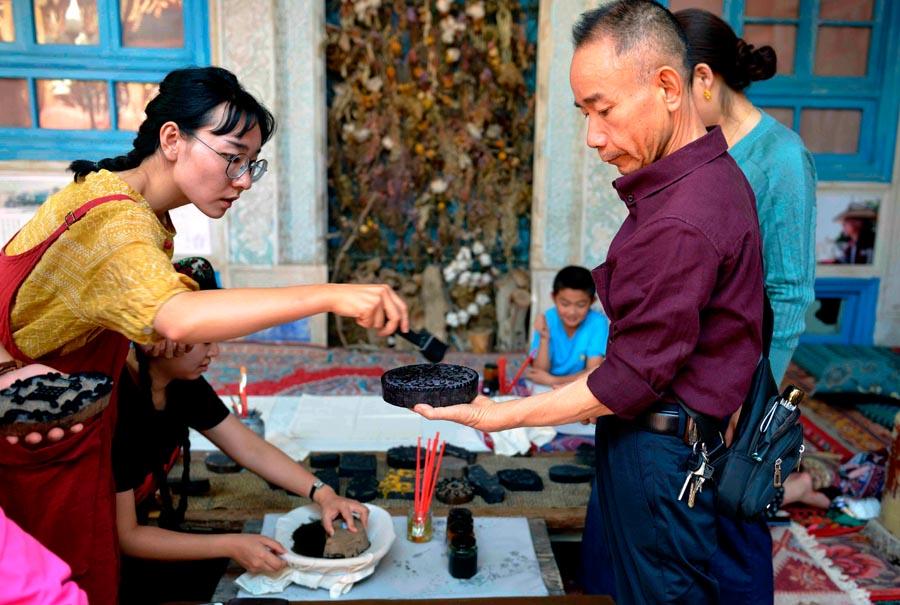 "The Pamir Plateau in Tashikurgan is another popular attraction. It is the location of the Muztagh Ata and the Khunjerab Pass (a navigable route high in the Karakoram Mountains) on China's border with Pakistan," he said.

Tashikurgan Tajik autonomous county, about 400 kilometers south of Kashgar city in the region's southwestern border area, was once a major crossing point on the ancient Silk Road. It is the traditional home of the Tajik ethnic group.

Zhou Hao, deputy director of the county's culture and tourism department, said tourism is set to become the largest source of income for local people, because sheep and cattle grazing will be prohibited from next year.

"We believe the development of tourism will bring the county a bright future. We are making great efforts to fight poverty, and we believe tourism can help improve the situation," he said.

He added that the county received about 770,000 visits from domestic travelers last year, generating revenue of around 140 million yuan, and facilities to accommodate tourists are improving all the time.

"We have about 3,000 beds available for travelers, from highly-rated hotels to homestays run by Tajik families. The development of tourism will not only help visitors to learn about the plateau and the Tajik people, but will also attract investment and bring better incomes for the local population," he said. 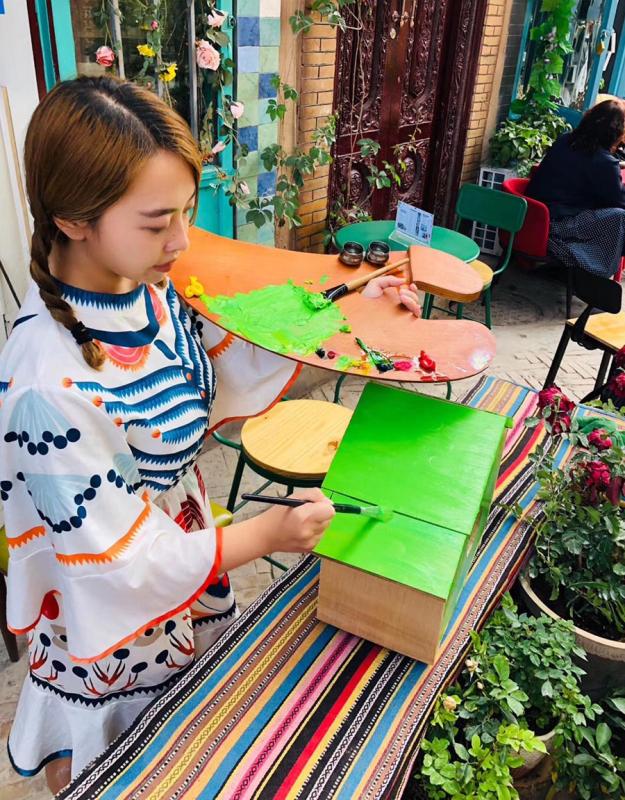 Zhang Saxia, owner of a juice and tea bar in Kashgar city, paints a nesting box for birds. (Photo provided to China Daily)

"For example, we arrange night fairs for tourists almost every evening, which attract an average of 1,000 visitors each time, bringing extra income to about 2,000 people."

Chen Yi, a 30-year-old visitor from Shanghai, was impressed with the highland views and the exotic culture on display in Kashgar and Tashikurgan.

"The most impressive part was not the marvelous landscape; the views are nice, of course, but the friendliness of the Tajik people touched me most," she said.

"Yesterday, some friends and I went to a restaurant run by a Tajik family. I was not used to the strong smell of the food, so I went outside to sit down and get some air. I was surprised when a very old lady, who seemed to be the mother or grandmother of the restaurant, came and gave me a hug."

Chen said she was taken aback by the elderly woman's warm approach. 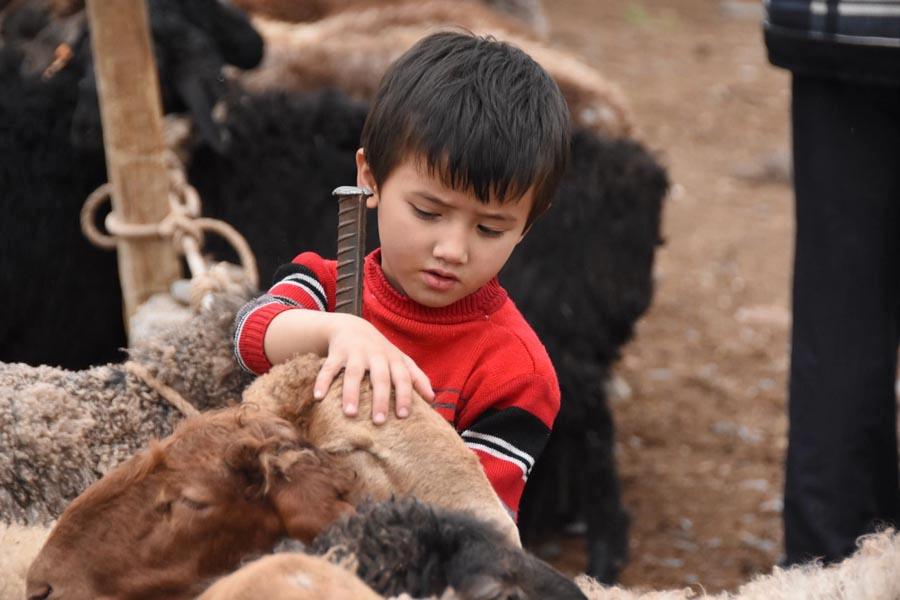 "She held me tightly and patted my head, treating me like her little granddaughter. My heart melted as I felt the kindness she showed me," she said. (Photo provided to China Daily)

"I will never forget that hug or my experiences in Kashgar and Tashikurgan. The area is totally different to how I imagined it. The views and the people are both wonderful."

Zhou, from the culture and tourism bureau, said the county is making great efforts to become a "holistic tourism attraction", where everything is connected.

"In the future, we will emphasize snow-themed tourism and border tourism," he said, adding that a few problems will have to be solved before tourism can be fully developed.

"The county is still in a painstaking fight against poverty, and it will require more financial support from the central, regional and prefectural governments. Also, we need preferential policies to attract more investors," he said.

Tashikurgan aims to receive 2 million visits by the start of next year, when 3,500 local residents will be involved in the tourism sector, he added.