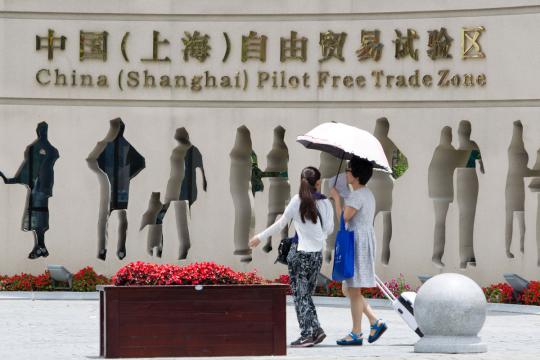 The planned addition of a new area to the China (Shanghai) Pilot Free Trade Zone aims at a higher level of opening-up and deeper reform in broader fields, and is not just a simple expansion in space or a duplication of FTZ policies, a top official from Shanghai said on Tuesday.

"The new area will compare itself with the most attractive FTZs in the world, to explore new policies and institutions that will see more opening-up and more market competitiveness," Shanghai Mayor Ying Yong said at a media conference in Beijing.

"We are to try on different pilots and carry out greater risk assessments, to build a special economic function zone with stronger international influence and competitiveness."

More institutional and policy innovations will be made to achieve breakthroughs, especially in fields such as trade and investment facilitation, free entry and exit of goods, convenient flow of capital, greater opening-up of the transportation industry, freedom in obtaining employment, and the fast and easy transmission of information, he said, adding that optimization of the tax system to make it more competitive compared with international standards will also be a focus.

Shanghai is also to take specific measures to further improve its business environment and services, to attract more foreign investment and foreign companies to Shanghai and whole China, he said.

According to Ma Chunlei, director of Shanghai's municipal development and reform commission, around 220 manufacturing projects will kick off in the city within the year, which will make Shanghai's service-industry-leading economic structure more optimized with stronger support from the manufacturing sector.

With first-round investment of 14 billion yuan ($2 billion), and a designed production capacity of 150,000 vehicles annually, the factory is the largest foreign-invested manufacturing project in Shanghai's history.

Ma said the factory has started installation of equipment, and plans to start production at the end of this year, with total output increasing to 3,000 cars per week gradually.

Within the year or early next year, the Chinese people will probably be able to buy the Tesla Model 3 produced in Shanghai, he said.