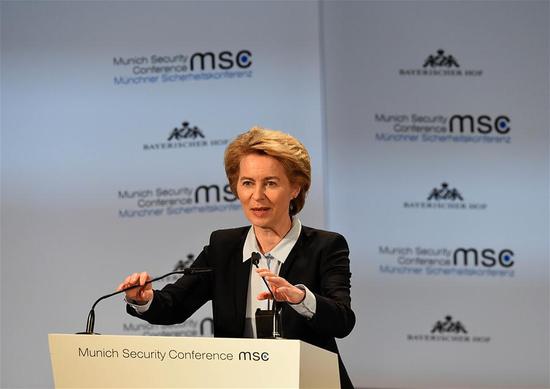 The European Union leaders on Tuesday agreed on the future leadership of the EU institutions, proposing Ursula von der Leyen, the female German defense minister, to be the next European Commission President.

Charles Michel, the Prime Minister of Belgium, is elected to be the next President of the European Council.

Christine Lagarde, the managing director of the International Monetary Fund, is nominated to be President of the European Central Bank.

Josep Borrell Fontelles, the Foreign Minister of Spain, is nominated to be the EU's foreign policy chief.

Except Michel, other candidates would have to go through formalities to get on the job.

Von der Leyen, who would be the first female European Commission President, is facing some resistance in the European Parliament which must vote to confirm her nomination, with several lawmakers saying earlier that she was unacceptable.

The nomination is clearly a serious blow to the so-called process of Spitzenkandidat, German for lead candidate.

The process, practiced in 2014 but not generally accepted or codified into law, links with European Parliament elections by having each major political group in the parliament nominating their candidate for Commission President prior to the parliamentary elections.

Before this year's parliamentary elections, political groups in the parliament named their lead candidates for the President of the European Commission, and they campaigned across the EU. But none of them was nominated to the most important EU position on Tuesday.

Iratxe Garcia, who leads the Socialists and Democrats bloc in the European Parliament, and Terry Reintke, deputy leader of the parliament's Greens group, both voiced their disappointment in the nomination.

Jean-Claude Juncker, current President of the European Commission, agreed Tuesday's nomination would not be easy in the parliament.

However, according to German Chancellor Angela Merkel, von der Leyen faced no opposition in the European Council, made up by leaders of the EU's 28 member states.

The nomination of two women to half of the posts has been hailed by politicians as a strong signal on gender balance, which has been the popular talk before and in the summit.

"First and foremost, we have chosen two women and two men for the four key positions. A perfect gender balance. I am really happy about it. After all Europe is a woman. I think that it was worth waiting for such an outcome," said Donald Tusk, current President of the European Council who chairs the leaders' meeting.

The European Council also took note of Ursula von der Leyen's intentions to nominate Frans Timmermans and Margrethe Vestager as the highest-ranking Vice-Presidents of the European Commission, Tusk said. That insures another female role in the highest echelons of the EU executive.

Germany and France, two power centers of the EU, each get to fill a national in the top posts, with better-known Christine Lagarde bringing international experience from Washington-based IMF. Josep Borrell Fontelle of Spain is from Southern Europe.

There are no central or eastern Europeans in the package, however. "We also expect Ursula von der Leyen to ensure an appropriate geographical balance in the team of Vice-Presidents," Tusk said.