T-union transport card use to expand to 260 cities 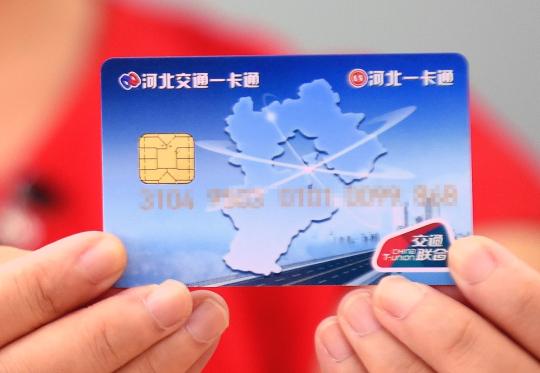 Getting up late in morning, Xu Ge rushed to the bus station. Though she tapped her transit card several times, the display still didn't show the cash balance as usual.

Just back from her home in Chongqing for the weekend, the 24-year-old accountant suddenly realized she mistook the Chongqing public transport card for her Chengdu one.

Xu moved to Chengdu, capital of Sichuan province, one year ago after landing her current job after graduation. But thanks to the high-speed railway, she usually returns to Chongqing to spend holidays with her parents.

As a fan of noncash payments, she eventually was forced to borrow money from passengers for the ticket fare.

"I always had to take two transit cards with me," she said. "But I saw news that the country is promoting a nationwide public transport card. I'm really looking forward to it coming to Chongqing."

Wu Chungeng, spokesman of the Ministry of Transport, said at a news conference recently that the China T-union transport card－China's nationwide public transit card, usable on all public transport systems including ferries, taxis, buses, bikes and subways－will cover 260 cities at prefecture level and above at the end of this year.

The integration of the transport card means that a passenger holding one card can ride buses or take subways in any of the designated cities without buying new cards and enjoy local preferential policies as well. Passengers can buy or change their local transport cards to T-union cards in line with local policy.

So far, the T-union card system has been installed in 245 cities with over 31.5 million cards in use, and 15 more will join the network within the year. Some tier-one cities including Shanghai and Chongqing still haven't joined the system yet, according to the ministry.

Yang Xinzheng, an expert at the China Academy of Transportation, said that transit cards were issued by local authorities who adopted different technical standards, making the integration of the program between cities in the same province difficult, let alone different provinces.

"It's always an extra expense to purchase a new card for people to take public transportation in different places. With the ministry promoting the T-union card since 2013, it saves time and money for the public," he said. However, he added that because the public transportation network is extremely massive and complex, it has taken time to reach full integration.

Beijing, for instance, is now upgrading and debugging its T-union card system, with its bus system temporarily only available for T-union transport cards from 50 designated cities, while its urban rail transit system accepts cards from 188 cities.

In promoting the card, the Beijing Municipal Commission of Transport announced on Tuesday that it will waive the fees－typically 20 yuan ($3)－to open a T-union card in mobile devices. Users of android smartphones and smart wristbands with NFC function may swipe their devices to pay for their public transit trips.

China expects to achieve integration of public transport cards in urban and rural areas by 2020 as a part of its nationwide interconnectivity plan.