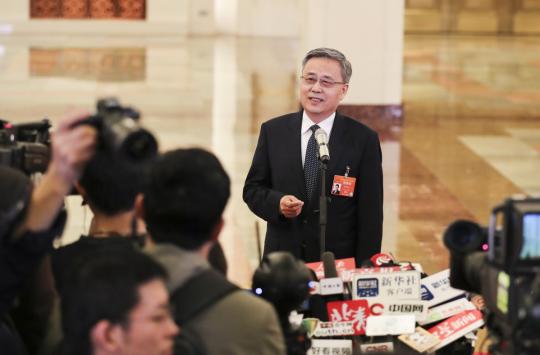 Guo Shuqing, Party secretary of the People's Bank of China and chairman of the China Banking and Insurance Regulatory Commission, answers queries in Beijing on March 5. (Photo by Kuang Linhua/China Daily)

China will push ahead with supply-side structural reform in the financial sector to help private enterprises solve financing difficulties and reduce financing costs, said Guo Shuqing, Party secretary of the People's Bank of China and chairman of the China Banking and Insurance Regulatory Commission.

"Giving credit and financial support to private enterprises, especially small and micro-sized enterprises, is the most important part of the supply-side structural reform in the financial sector," said Guo in an interview on Tuesday during the annual two sessions.

"We will adjust the financial sector in terms of its institutional system, product system and market system," he added.

Changes have taken place in the institutional system of the Chinese banking sector, with a rise in the number of small and medium-sized banks and private banks that mainly target small businesses, whereas the market share of the five largest State-owned commercial banks by assets dropped from more than 50 percent to 38 percent in the past 10 years.

Many banks, including the "Big Five" commercial banks and 12 national joint-stock commercial lenders, also increased their lending to small and micro-sized enterprises and improved financial services for such companies by setting up their own inclusive finance departments.

In his Government Work Report delivered on Tuesday, Premier Li Keqiang set a goal for large State-owned commercial banks to increase their loans to small and micro-sized enterprises by more than 30 percent year-on-year in 2019.

"I believe we can achieve this goal," Guo said.

As of the end of 2018, the balance of loans offered by banking institutions to small and micro-sized enterprises, as well as small and micro-business owners, was 33.5 trillion yuan ($5 trillion).

Among the total, small and microsized enterprise loans with a total credit line of up to 10 million yuan for each borrower increased by 21.8 percent from the beginning of last year to 9.4 trillion yuan. The growth rate was more than 9 percentage points higher than that of various types of loans, according to the CBIRC.

One of the biggest challenges faced by banks regarding small business lending is to acquire sufficient information to ensure that the companies which have obtained loans are conducting normal business, rather than speculating in the market, and can repay loans.

With the adoption of technologies such as big data, large banks have made tremendous progress in this aspect, noticeably accelerating their procedure for granting loans while keeping their nonperforming loan ratio down. Some medium-sized banks and internet-based banks are also doing well in big data exploration, Guo said.

"We will further popularize these experiences among large, medium and small-sized banks this year and will take more measures to support the development of private enterprises," he said.

The nation's top banking and insurance regulator noted that more work should be done in other financial sectors, in addition to banking.

"China will develop a stronger multi-layered capital market, which includes large stock exchanges, regional equity markets, private funds and venture capital funds, to better support the development of innovative enterprises," he said while highlighting the importance of daring innovation in the banking, insurance and securities sectors.

At a media briefing on Thursday, Xiao Yuanqi, chief risk officer and spokesman of the CBIRC, said the country will adopt various measures including mergers, acquisitions and restructuring to lower the risks of high-risk financial institutions and even allow some of them to experiment with bankruptcy.