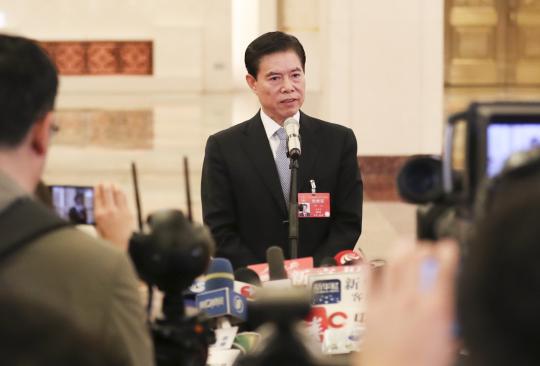 Minister of Commerce Zhong Shan answers queries on the sidelines of the two sessions on March 5. (Photo by Kuang Linhua/China Daily)

China and the United States are very likely to reach a consensus on further opening up China's financial sector in their ongoing trade talks, the country's top banking and insurance regulator said on Tuesday.

"On issues of financial opening-up, China and the U.S. can absolutely reach an agreement, although there may still be small divergences at present," said Guo Shuqing, Party secretary of the People's Bank of China and chairman of the China Banking and Insurance Regulatory Commission.

Guo said his opinion was based on the fact that China has taken the initiative to open up the financial sector to satisfy its development needs over the past 40 years, and that practitioners and regulators of the two countries' financial sectors are very familiar with each other.

There has been misunderstanding of China's currency policies, which "can be totally removed" through conversations, Guo said on the sidelines of the second session of the 13th National People's Congress in Beijing.

China has been working to maintain the stability of the yuan, rather than depreciating the currency to gain competitive advantages in trade, Guo said.

Exchange rates and the services sector, both of which are closely related to finance, are among the six areas where Sino-U.S. trade talks have made substantial progress, Guo said. There is no doubt that China's financial opening-up will deepen, he added.

China and the United States have conducted several high-level economic and trade negotiations since the presidents of the two countries agreed a 90-day tariff truce in early December.

The Office of the U.S. Trade Representative recently announced the postponement of a planned tariff hike on $200 billion worth of Chinese imports and maintaining the tariff rate at 10 percent until further notice.

Minister of Commerce Zhong Shan said on Tuesday that Sino-U.S. trade talks have been fruitful, with breakthroughs having been made in some areas.

"The two parties have agreed to extend the negotiations, and during the extension, both sides will not implement the planned tariff hike. We should cherish the hard-earned achievement," Zhong said on the sidelines of the annual meeting of the nation's top legislature.

"At present, working teams are still continuing with the negotiations. We still have a lot to do," Zhong said.

"To reach a consensus, the two parties should seek common ground while setting aside their differences and make more efforts," Zhong said, adding that both the two parties and the global economy will benefit if a trade deal is made.

Mutual respect and mutual benefit have been the principles for both China and the U.S. during the negotiations, Zhong added.

Zhang Yansheng, a senior researcher at the China Center for International Economic Exchanges, said China and the U.S., as the world's two largest economies, can achieve a mutually beneficial agreement in the trade talks to allay the global concerns.