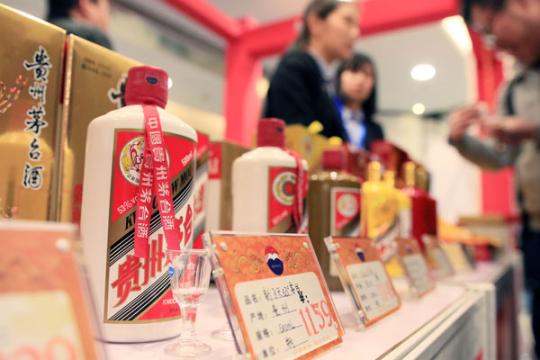 Kweichow Moutai's wine at an exhibition in Beijing. (Photo by Zhu Xinxing/China Daily)

To prevent official corruption, authorities in Guizhou province have named the well-known liquor brand Moutai in the local disciplinary regulations of the Communist Party of China.

A regulation was issued on Thursday prohibiting officials from privately benefiting from five types of behavior related to Moutai, which is produced in the province.

The regulation bans officials, their spouses, children and their children's spouses from participating in business activities related to Moutai. Officials will also be strictly prohibited from taking advantage of their positions to obtain Moutai business licenses, increase sales quotas for existing stakeholders or facilitate resale of the liquor.

Officials are also banned from sending or receiving Moutai gifts, abusing their authority in Moutai business approvals and other behavior that improperly participates in, or interferes with, the operations of Moutai-related businesses.

The regulation is a reflection of the effort to ban leading cadres from engaging in commercial activities or abusing their power, combined with the reality of the situation in Guizhou, said Yang Weidong, a professor at the Chinese Academy of Governance's Department of Law.

The regulation targeted Moutai mainly because of its special relationship with Guizhou and its huge impact on the province's development, Yang said.

Produced by State-owned Kweichow Moutai Co, Moutai is the most popular liquor brand in China. Distilled from high-quality sorghum grown in Guizhou, and 53 percent alcohol by volume, it is a mainstay at festive occasions in the country, from New Year's dinners and wedding receptions to business banquets. An ordinary 500-milliliter bottle costs 1,499 yuan ($221).

"Actually, the regulation is an extension of existing anti-graft regulations and rules and requires cadres to fairly exercise their power," Yang said. "I think it will be conducive to improving local Party conduct and upholding integrity, as well as to the Moutai Group's development."

In December, the Central Commission for Discipline Inspection issued a notice banning officials from benefiting from well-known and valuable local brands.

But Ren Jianming, a professor at Beihang University's School of Public Administration, said it is still "quite rare to see a government regulation aimed at a specific commercial brand".

He said demand for Moutai is always much greater than supply, meaning "those who obtain Moutai resources can win economic and even political benefits, which could make enforcement quiet complex".

"Also, asking cadres to self-report their violations has many uncertainties," Ren said.

The regulation was a necessity for Guizhou, since the liquor had featured in the cases of several corrupt local officials, Ren said, and it would prevent interference in the Moutai company's management and operations.

In February last year, the former director of Guizhou's Department of Natural Resources, Zhu Lijun, was removed from his Party post and demoted for buying Moutai with 570,000 yuan in public funds.

Former provincial vice-governor Wang Xiaoguang, who pleaded guilty to insider trading and taking bribes in December, was reported to have been a heavy drinker of Moutai and often asked his subordinates to buy him the liquor with public funds. He also illegally owned four stores in Guiyang, the provincial capital, that sold top-brand liquor.

In May 2017, Luo Jianqiang, the former vice-mayor of Bijie, a city in Guizhou, was removed from office and expelled from the Party. The official announcement of his punishment said that he once received two bottles of vintage Moutai and 24 other bottles of Moutai for State banquets.

The liquor has also featured in the downfall of officials elsewhere in China.

The former secretary of the CPC working committee for the Zhumadian urban-rural integration demonstration area in Henan province, Li Xinzhong, was sentenced to 10 years in prison in October last year for accepting bribes of 5.78 million yuan, including Moutai worth more than 2.36 million yuan.

The new regulation also requires those who have violated its standards in the past and those who do so in future to make a special report to the authorities within a month from the date of its issuance and rectify the situation as required.

Anyone who intentionally violates or circumvents the regulation or fails to take the required action will be strictly punished in accordance with law and Party discipline. The regulation also stipulates that retired cadres and former management personnel of Moutai Group also need to abide by the rules.

The regulation requires Kweichow Moutai Co to keep a record of officials who seek to interfere in its normal operations or who engage in any banned behavior.

Experts said the effectiveness of the regulation will mainly depend on its enforcement.

"Actually, I am not very optimistic about its effectiveness because Moutai is not only a luxury item but also a status symbol in China," Ren said.