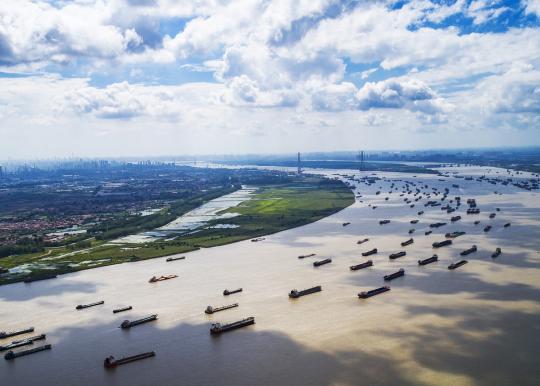 Most environmental violations uncovered by China's top environmental watchdog last year in bodies of water that supply drinking water and most discolored and foul-smelling water bodies it found in key cities have been addressed, the watchdog said.

Inspectors discovered 6,251 violations during two rounds of inspections involving 1,586 bodies of water in the 11 provinces and municipalities along the Yangtze River Economic Belt and many more around China in May and September.

Currently, 99.9 percent of the violations have been rectified, Li Ganjie, minister of ecology and environment, said in the annual conference of the ministry that concluded on Saturday.

He also said 95 percent of the 1,009 discolored and foul-smelling water bodies environmental officers found in 36 key cities have been cleaned.

"Defending clean waters" is a primary task for 2019, Li said, adding that a more comprehensive campaign, including an environmental protection and remediation project for the Yangtze River, pollution controls in Bohai Sea and for agricultural water pollution are needed.

He said the ministry will also inspect bodies of water this year that supply drinking water for rural areas, mainly those offering 1,000 metric tons of drinking water a day or serving populations larger than 10,000.

According to the ministry, the quality of surface water in China markedly improved last year.

Monitoring at 1,940 sites found 71 percent of water at or above Grade III, the third-highest in the country's five-tier water quality system, up by 3.1 percentage points.

Bodies of water listed below Grade V, the poorest quality, dropped by 1.6 percentage points to 6.7 percent.

In addition to protecting the water ecosystem, the ministry will devote more efforts to enhancing the governance of the increasing amount of solid waste in the country while continuing to reduce trash imports, Li said.

Trash imports fell by 46.5 percent year-on-year in 2018, Li said, adding that both the types and amounts of waste imports will be further reduced.

The ministry has been cracking down on illegal transfer and dumping of solid waste and hazardous waste, and 99.7 percent of 1,304 such violations the ministry found in 2018 have been rectified, Li said.

He also vowed to carry out pilot programs for the construction of "zero waste" cities and launch a campaign to control pollution from lead storage batteries in 2019.

The construction of treatment facilities for hazardous waste across China will be accelerated, he said.

Even though all waste-to-energy plants have rectified violations found in inspections last year to ensure up-to-standard emission discharges, Li said, the ministry will formulate stricter environmental standards for the construction of such plants.