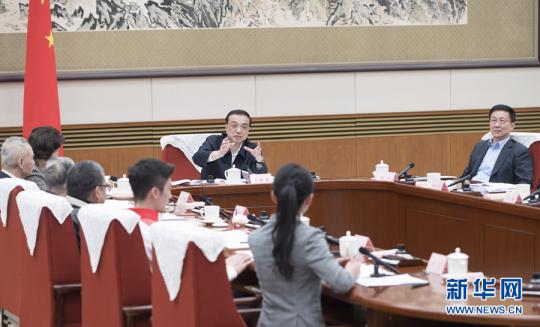 Chinese Premier Li Keqiang makes remarks while presiding over a symposium on Jan 18, 2019. At the symposium, he consulted representatives from the education, culture, health and other sectors on a draft version of the government work report. (Photo/Xinhua)

Premier Li Keqiang emphasized stimulating market vitality to withstand downward pressure and relying on the strength of the people to promote coordinated economic and social development.

The premier's comments came as he presided over a symposium on Friday to solicit opinions from professionals in higher education, science and technology, healthcare and sports on the draft of the Government Work Report, which he will deliver to the annual session of the National People's Congress in March.

Seven people, including two university presidents, a hospital president and an Olympic champion, were invited to speak at the State Council meeting.

Li noted that the country's social and economic development have seen new achievements over the past year, which fully indicates the strength of the people.

To accomplish the government's work for the year, it is important to continue to rely on the joint endeavors of the people and to take the expectations of the public into full consideration, he said, adding that the government should prioritize solving key and difficult issues concerning the public livelihood.

Yang Fujia, president of the University of Nottingham Ningbo China, elaborated on the need for the country to boost development of institutions of higher learning. Xue Qikun, vice-president of Tsinghua University, called for efforts to boost high-quality innovation in science and technology.

Li said the government will continue to increase the average years of schooling among the public and boost the development of vocational education.

He also stressed the need to better stimulate creativity among researchers, step up research and make breakthroughs in technological bottlenecks constraining the country's development.

Ni Xin, president of Beijing Children's Hospital, proposed that the government make greater efforts in prevention and control of chronic diseases among children, support social capital in the healthcare sector and enhance management of vaccines.

Li called for relevant government departments to heed the proposal and step up oversight to prevent cases of people receiving flawed vaccines.

Wu Dajing, the first Chinese male speedskater to win an Olympic short-track gold, offered his advice on the development of winter sports.

Li said it is important to take the country's hosting of the 2022 Winter Olympics as an opportunity to push winter sports to a higher level.

It is important to coordinate the development of competitive sports and public fitness, and keep improving the level of public health, he said.