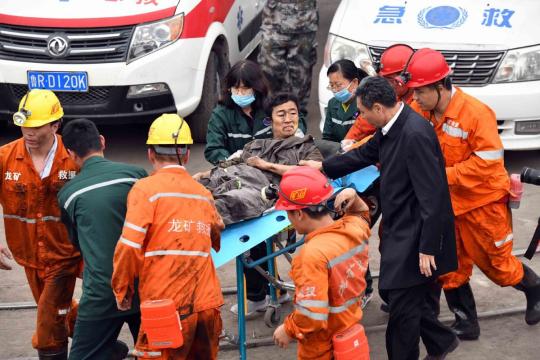 Emergency personnel surround a dazed worker as he is rescued from a coal mine accident in East China's Shandong province on Oct 21, 2018. (Photo/Xinhua)

The number of dead and missing in natural disasters last year was down 60 percent from the average of the previous five years, while direct economic losses were down by 34 percent, Huang Ming, Party chief of the Ministry of Emergency Management, told the ministry's annual conference, which concluded on Friday.

He said the number of workplace accidents and the number with many casualties had both decreased.

The number of accidents with a death toll of more than 10 or direct economic losses above 100 million yuan ($14.8 million), for example, dropped by 24 percent year-on-year. The death toll in such accidents was down almost 34 percent, Huang added.

"Since the founding of the People's Republic of China, 2018 was the first year that saw no accidents with a death toll beyond 30," he said.

It was the first annual conference for the ministry, which was established last year. In national institutional reforms initiated by the State Council, 13 duties from 11 government bodies, mostly related to disaster relief, were transferred to the newly established ministry.

Referring to last year's achievements as a good beginning for the ministry, Huang said its top priority is to prevent and defuse major safety risks and he vowed intensified efforts in pursuit of that goal.

"We must resolutely win the campaign to prevent and defuse major risks," he said.

In addition to enhancing preparations for dealing with emergencies, for example by allocating rescuers in advance to help ensure rapid response, the ministry will also improve its information reporting system, Huang said.

He ordered his colleagues to spare no effort to ensure that responsibility for work safety and natural disaster control is taken and enforced, with no level of government overlooked.

Campaigns should be launched, especially in high-risk industries, to guarantee that precautionary measures are in place to curb major incidents, Huang said.

He also demanded improvements in the accuracy and effectiveness of early risk warning by stepping up comprehensive monitoring of natural disasters.

Huang warned that the country's emergency response capability is not yet adequate to cope with complicated public safety situations, and stronger measures and higher standards need to be adopted to improve the capability to manage various disasters.

As it builds up a comprehensive fire and rescue team, the ministry will also support the development of civilian rescue teams, he said.

Huang also vowed to accelerate the drafting and amendment of laws and regulations for emergency management and to improve law enforcement in work safety supervision.