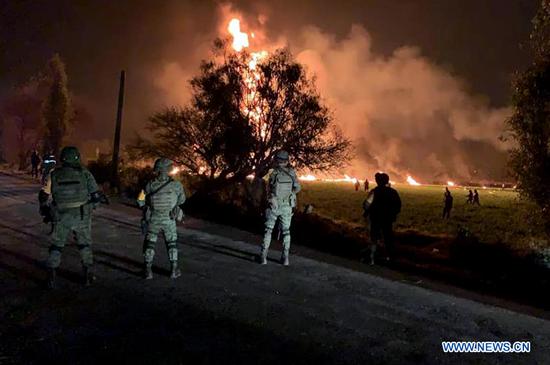 Photo taken with a mobile device shows army working at the site of an explosion in the municipality of Tlahuelilpan, Hidalgo state, Mexico, Jan 18, 2019. (Photo/Xinhua)

Chinese President Xi Jinping on Sunday sent a message of condolences to his Mexican counterpart Andres Manuel Lopez Obrador over a deadly pipeline blast that has killed at least 73 people.

In his message, Xi said he was shocked to learn of a fuel pipeline explosion in central Mexico that has caused heavy casualties.

On behalf of the Chinese government and people, as well as in his own name, Xi extended his deep condolences to the victims and sympathy to their families and the injured people.

Xi said he wishes a quick recovery for the injured, and expressed China's readiness to provide necessary help.