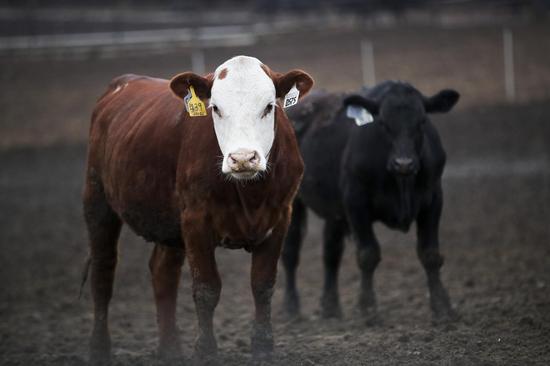 Photo taken on May 2, 2018 shows cattle raised by farmer Bill Pellett at his farm in Atlantic of Iowa, the United States. (Xinhua/Wang Ying)

U.S. beef producers are looking forward to gaining a larger share in China, one of the fastest-growing beef markets in the world, an industry expert has said.

China is a relatively new market for U.S. beef, but with a lot of potential to tap, Ashley Kohls, executive director of the Minnesota State Cattlemen's Association (MSCA), an organization that currently represents over 1,000 members from all segments of the beef community, told Xinhua.

U.S. beef producers have been excited to enter the Chinese market after years of absence as a result of the detection of the mad cow disease in the United States, said Kohls, on the sidelines of Farmfest, an annual trade show held this week in Minnesota.

According to the industry expert, who is also a beef producer herself, about 12 percent of the U.S. beef production is exported to overseas markets and Minnesota is the 10th largest beef producing state in the country.

"We're now putting a lot of efforts into talking to folks who sell beef in China and talking about how great U.S. beef is and then also showing folks how to cook U.S. beef in the market," said Kohls, adding that her association is sending a working group to Asia every year since 2017 to promote sales.

"It was a really neat experience going to the Asian countries because they're all very important for us when it comes to beef exports and we're trying to bring a new market," the industry insider said, drawing on her own experience of promoting U.S. beef products in Asian markets including China last May.

"We had the opportunity to meet with grocery store owners and restaurant owners. It was a fantastic experience. Everybody in Beijing was really nice and was really eager to learn and they all loved the U.S. beef," Kohls said while detailing her trip.

She said that given the encouraging feedback from the Chinese partners about U.S. beef, "We're confident that over time we will develop the market," though "it takes time to build those relationships."

Speaking of the ongoing U.S.-China trade tensions, Kohls said her organization is hopeful that "we'll get things resolved" before the situation becomes even worse, as trade rifts between the top two economies are likely to cloud the outlook for business collaborations.