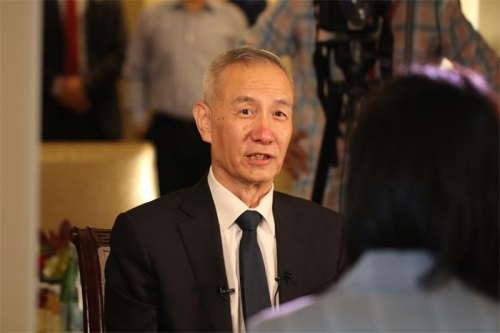 Chinese Vice-Premier Liu He, a special envoy of President Xi, talks to the media on Saturday after conducting "constructive consultations" with the U.S. team in Washington on Thursday and Friday. (Photo by Zhao Huanxin / China Daily)

The consensus that there will be "no trade war" — reached during the latest round of trade talks between the world's top two economies — means a lot, not only for the Sino-U.S. economic relationship, but also for the global economy as a whole, according to officials and analysts from both countries.

A delegation led by Vice-Premier Liu He, President Xi Jinping's special envoy, had "positive, pragmatic, constructive and fruitful" talks on Thursday and Friday with the U.S. team headed by Treasury Secretary Steven Mnuchin, following their first round of talks in Beijing early this month.

The biggest achievement coming from the latest trade talks is the consensus that there will be no trade war and both sides will stop placing tariffs on one another, Liu said at a news briefing on Saturday.

The achievement comes from the previous consensus reached by top leaders of the two countries and is in the interests of the people from both countries and the world, Liu said.

The healthy China-U.S. economic and trade ties are in line with the historical trend, Liu said, adding that the two countries should properly handle their differences through dialogue and treat them calmly in the future.

Soybeans are loaded into a truck during harvest in Princeton, Illinois, U.S., Sept 29, 2017. [Photo/VCG]

Wei Jianguo, former vice-minister of commerce, said the collaboration between Beijing and Washington will be conducive to consumers and businesses of the two countries and it will help fuel the world economy, as the world's top two economies are closely interdependent and intertwined.

Wei added that imports of high-quality goods and services from foreign markets including the U.S. will help meet the growing needs for Chinese consumers, and it will help reduce deficit in bilateral trade.

The two countries agreed to take measures to reduce the U.S. trade deficit, with China significantly increasing purchases of U.S. goods and services, which will help support growth and employment in the U.S., according to a joint statement issued on Saturday.

They agreed on "meaningful increases" in U.S. exports of agricultural and energy products and greater efforts to increase trade in manufactured goods and services, the statement said.

In answering the question about what will be followed in the coming months, Liu said the two sides have already established some working groups, including the agricultural group.

"Maybe some ministers from the U.S. government will lead the groups to Beijing" to have deeper discussions and try to make concrete deals, Liu said.

At the media briefing, Liu said China is ready to buy goods from the United States and the rest of the world, answering Xi's call for further market reform and opening-up. Liu said China, with its huge middle-income population, will become the world's largest consumption market.

This market will be highly competitive, so nations eyeing for market share have to improve their products and services so that the Chinese consumers would like to buy them, he said.

The consensus released after the talks shows that negotiation and collaboration, rather than unilateral trade action, is the right path forward to address economic and trade disputes, experts said.

Chen Jiahe, chief strategist at Cinda Securities, said collaboration and cooperation rather than conflict are the mainstream approaches among major countries around the world.

Such cooperation will not only benefit people of the two countries but also those in the Asia-Pacific region and around the world, all of whom are interconnected in a globalized economy.

Qu Tianshi, China economist at ANZ Group, said the trade talks helped reverse global pessimism about an escalation of a large-scale trade war and it will reduce external uncertainties and create a stable environment for China to push domestic reforms.

Wang Huiyao, founder and president of the Center for China and Globalization, said the resolutions reached during this round of trade talks bode well for further improvement of the relations between the two countries.

"It has laid a solid foundation for the resolution of any problems that may arise in bilateral trade relations in the future," Wang said.

"This sounds positive that both China and the United States have come to agreement on key issues. I'm sure there will be further discussions to finalize the details," said Rick Kimberley, president of Kimberley Farms Inc in Iowa.

Vice-Premier Liu offered on Saturday a note of caution that it will take longer to resolve the structural problems in China-U.S. economic and trade relations.

While China's import of U.S. goods, such as agricultural products and energy, will both help meet the needs of the Chinese people and bring down the U.S. trade deficit, the U.S. side could do a lot more if it indeed intends to cut its overall trade deficit.

Many economists have said that the U.S. trade deficit is a result of U.S. fiscal policy, the low personal savings rate of Americans and the role of the U.S. dollar as a global reserve currency.

China has been making greater efforts to increase its imports to meet the growing needs of the Chinese people and for high-quality economic growth. The inaugural 2018 China International Import Expo to be unveiled in Shanghai in November is a major move in that regard.