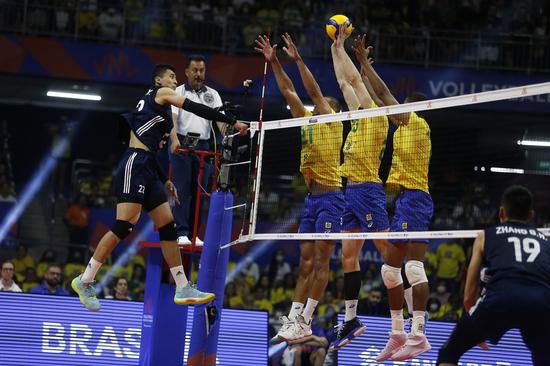 "This is a big victory for our team, it's very encouraging," outside hitter Yuan Dangyi said. "We entered the match determined to do our best but we knew Brazil were the No. 1 team in the world and very strong opponents."

He added: "I think today we played better and that's why we won. Each of us was focused on our own roles and that was very important. We'd love to play Brazil again because they're so strong."

The result at the Nilson Nelson Arena in Brazil's capital marked China's first win in the competition since 2019 and saw Poland displace Brazil at the top of the world rankings.

China's opponents in the next cluster of matches -- from June 22 to 26 -- will be France, Germany, Argentina and Italy while Brazil will face Poland, Serbia, Iran and Bulgaria.

The games form part of the VNL preliminary round. The top seven teams will contest the finals in Bologna, Italy, from July 20 to 24.