China's Cultural and Natural Heritage Day falls on June 11 this year. More than 6,200 activities have been planned across the country to celebrate this year's cultural and natural heritage day, according to the Ministry of Culture and Tourism.

The Summer Palace, which integrates numerous traditional halls and pavilions, was an imperial garden of the Qing Dynasty (1644-1911). It is an outstanding expression of the creative art of Chinese landscape garden design, incorporating the works of humankind and nature in a harmonious whole. 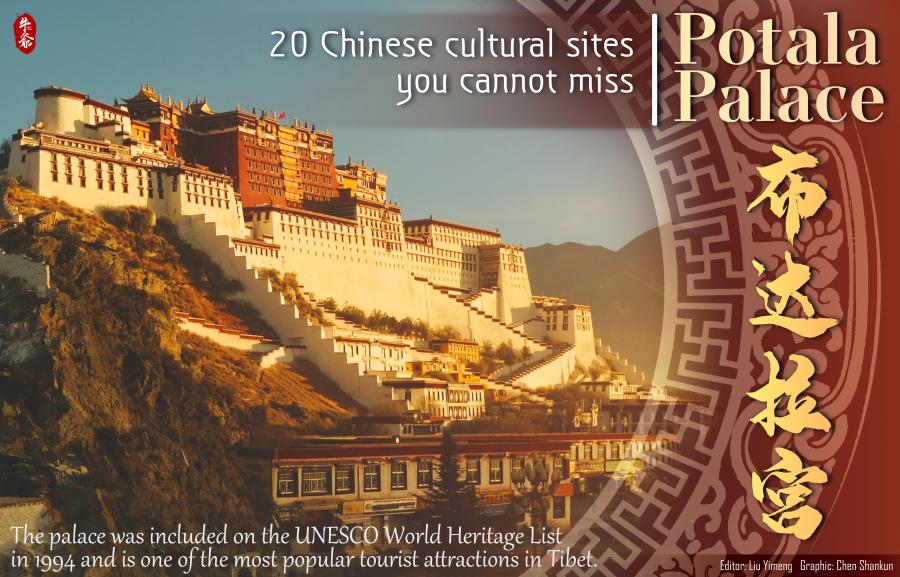 The Potala Palace, located in Lhasa, was built by Tibetan King Songtsen Gampo in the 7th century and expanded in the 17th century. The palace was included on the UNESCO World Heritage List in 1994 and is one of the most popular tourist attractions in Tibet.

The picturesque sceneries of West Lake in Hangzhou and its surrounding hills have inspired numerous poets, scholars, and artists since the 9th century. It was added to the World Cultural Heritage list in 2011. 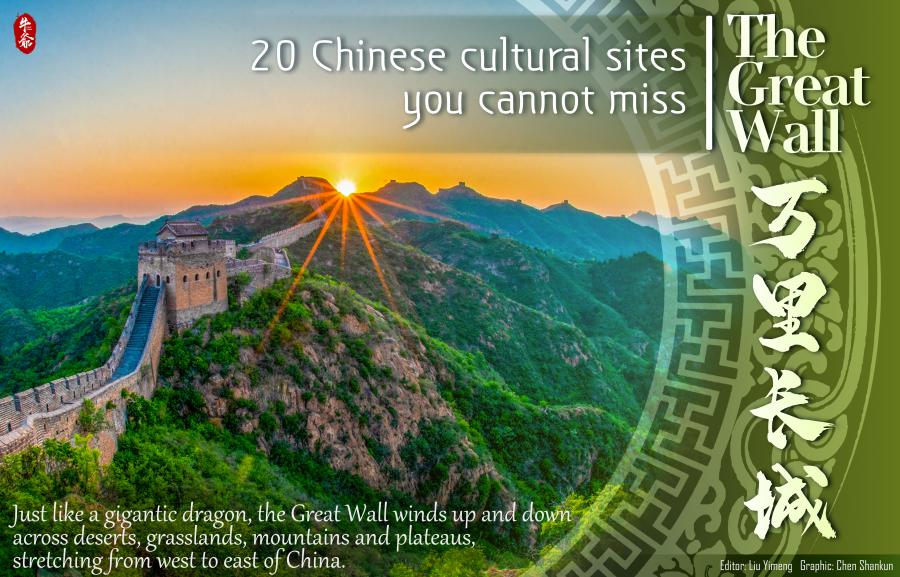 Just like a gigantic dragon, the Great Wall winds up and down across deserts, grasslands, mountains and plateaus, stretching from west to east of China.It begins in the east at Shanhaiguan in Hebei Province and ends at Jiayuguan in Gansu Province to the west.Its main body consists of walls, horse tracks, watch towers, and shelters on the wall, and includes fortresses and passes along the Wall. 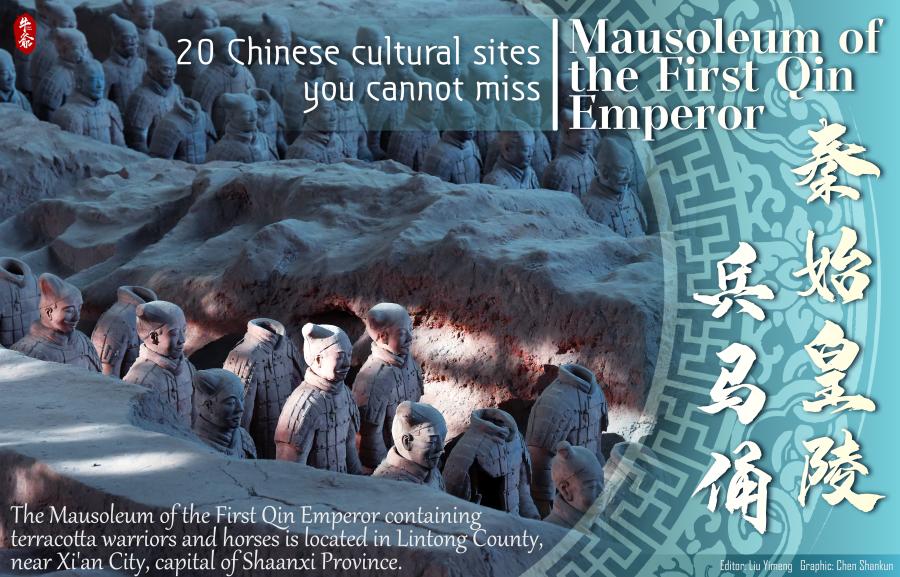 The Mausoleum of the First Qin Emperor containing terracotta warriors and horses is located in Lintong County, near Xi'an City, capital of Shaanxi Province. Constructed from 246 BC to 208 BC, the mausoleum was the first of its kind in Chinese history. 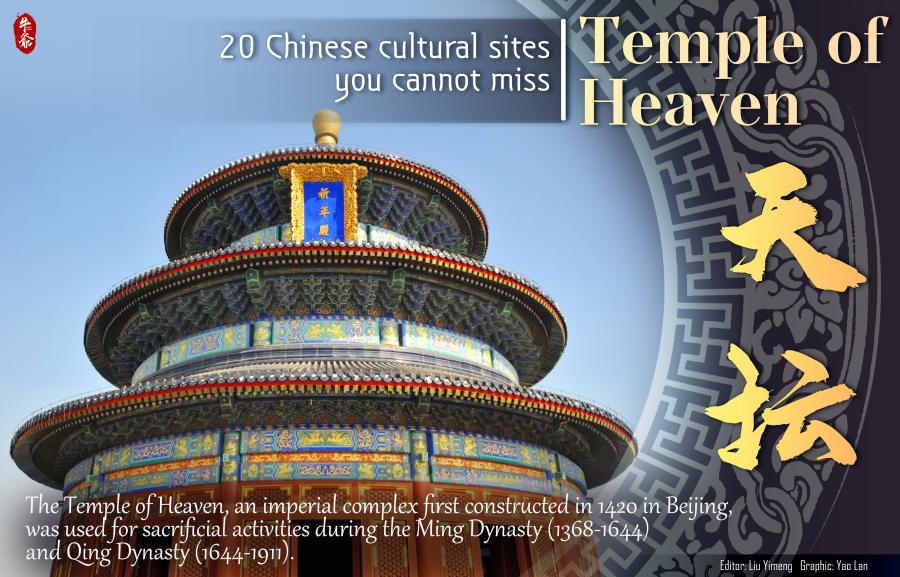 The Temple of Heaven, an imperial complex first constructed in 1420 in Beijing, was used for sacrificial activities during the Ming Dynasty (1368-1644) and Qing Dynasty (1644-1911). The overall layouts including its individual buildings symbolize the relationship between earth and heaven, the human world and God’s world. It was inscribed on the World Cultural Heritage list in 1998.

Consisting of 46 buildings, constructed between the 15th and 20th centuries, Fujian Tulou is an exceptional example of dwelling in a large community within one building. Generally, the structure of tulou is usually circular or square in shape. 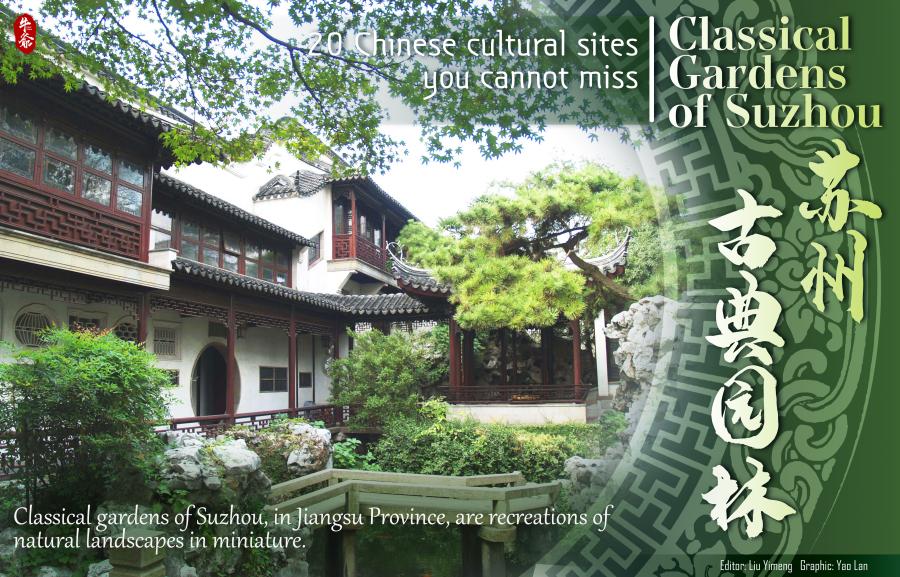 Classical gardens of Suzhou, in Jiangsu Province, are recreations of natural landscapes in miniature. The gardens are the representative works in Chinese classical garden building, in which meticulous designs of landscape and buildings convey Chinese philosophy. Located in Luoyang, Henan Province, the Longmen Grottoes comprise more than 2,300 caves and niches carved into the steep limestone cliffs over a one-km-long stretch. 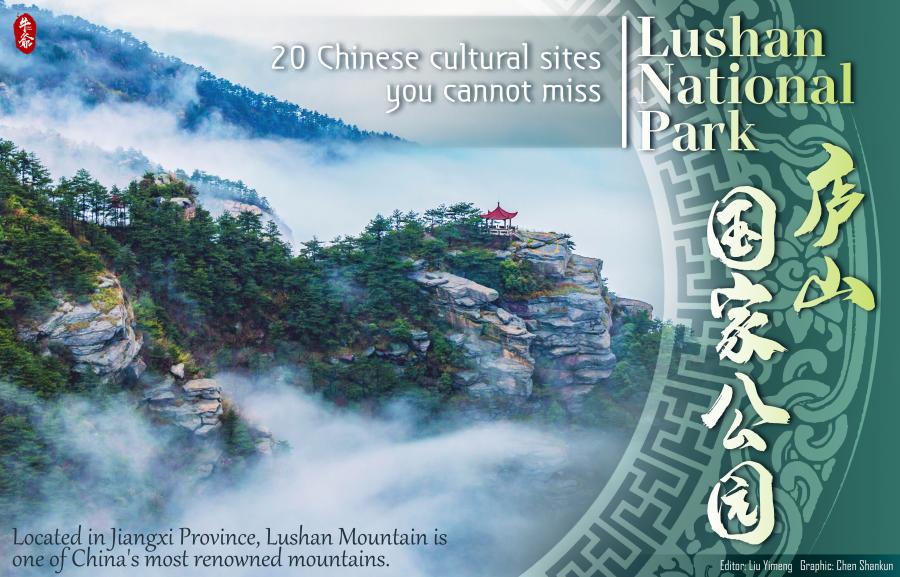 Located in Jiangxi Province, Lushan Mountain is one of China's most renowned mountains. It is not only famous for its majestic peaks and breathtaking scenery, but also the birthplace of Chinese landscape poetry.

With a history of more than 800 years, the Old Town of Lijiang in Yunnan Province was listed as a world cultural heritage site by UNESCO in 1997.

Located in Fujian Province, Mount Wuyi is a landscape of great beauty. It is the most renowned biodiversity conservation area in East China.

The Archaeological Ruins of Liangzhu City, located in Zhejiang Province, have gained worldwide recognition as bearing testimony to the existence of at least 5,000 years of Chinese civilization.

Xinjiang Tianshan is part of the Tianshan mountain system of Central Asia, one of the largest mountain ranges in the world. Xinjiang Tianshan presents unique physical geographic features and scenically beautiful areas. It is inhabited by rare flora species and was inscribed on the World Natural Heritage Site list in 2013. 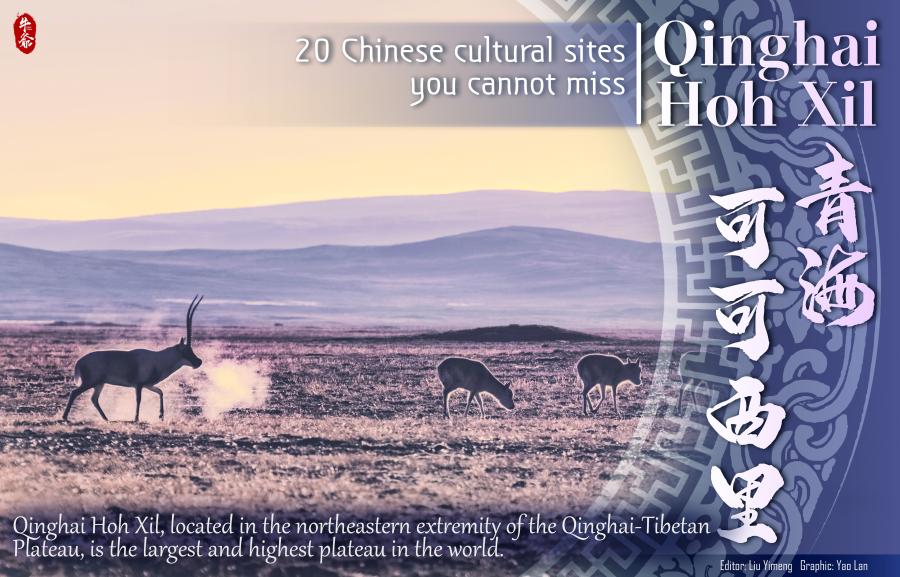 Qinghai Hoh Xil, located in the northeastern extremity of the Qinghai-Tibetan Plateau, is the largest and highest plateau in the world. It is a paradise for wildlife and home to over 230 species of wild animals including the endangered Tibetan antelope. 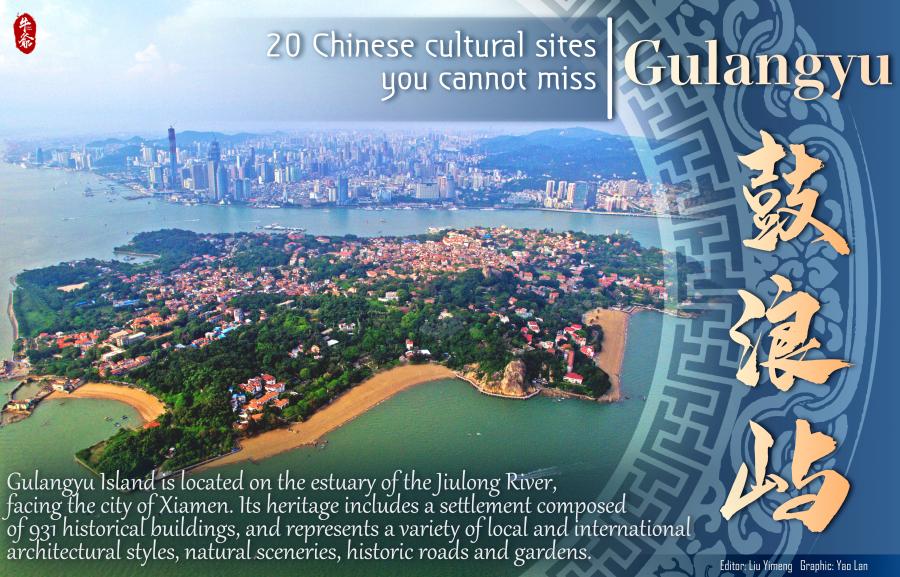 Gulangyu Island is located on the estuary of the Jiulong River, facing the city of Xiamen. Its heritage includes a settlement composed of 931 historical buildings, and represents a variety of local and international architectural styles, natural sceneries, historic roads and gardens. 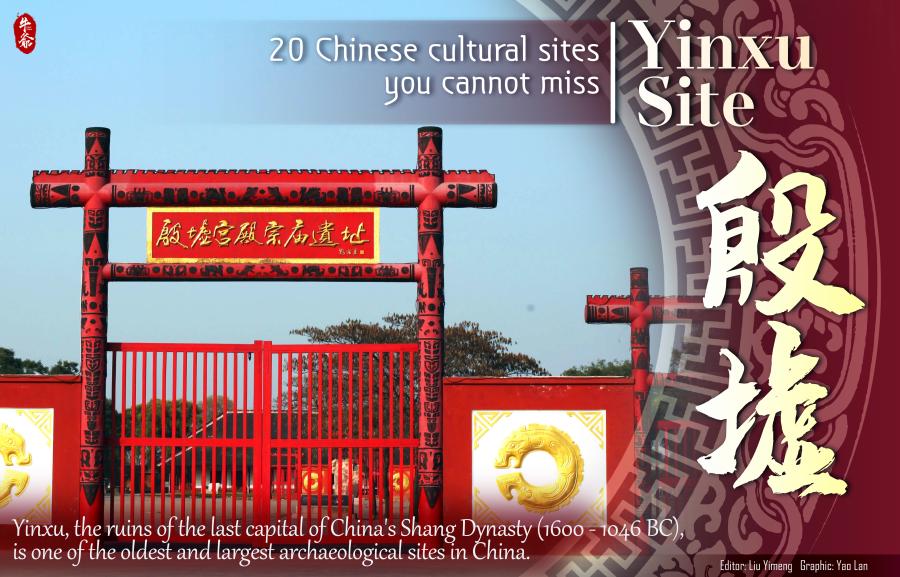 Yinxu, the ruins of the last capital of China's Shang Dynasty (1600 - 1046 BC), is?one of the oldest and largest archaeological sites in China.

It stands as a testimony of ancient Chinese culture, crafts, and sciences, besides exhibiting the Chinese Bronze Age.

The Ancient City of Pingyao, a UNESCO world cultural heritage site in Shanxi Province, is famous for its well-preserved?ancient?architecture. It was built in the 14th century and evolved to be the country's financial center from the 19th century to the early 20th century. 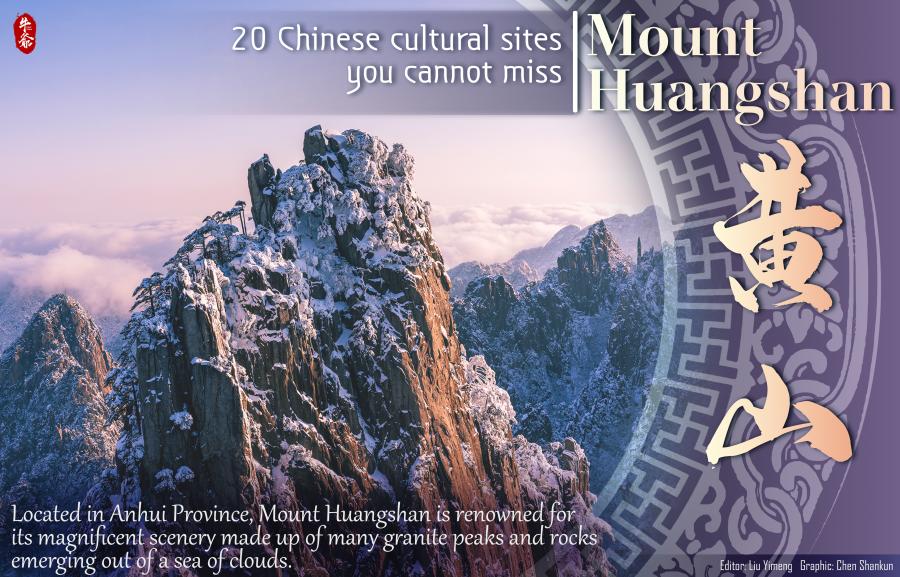 Located in Anhui Province, Mount Huangshan is renowned for its magnificent scenery made up of many granite peaks and rocks emerging out of a sea of clouds. Also known as "the loveliest mountain of China," it has been acclaimed through art and literature during a good part of Chinese history. 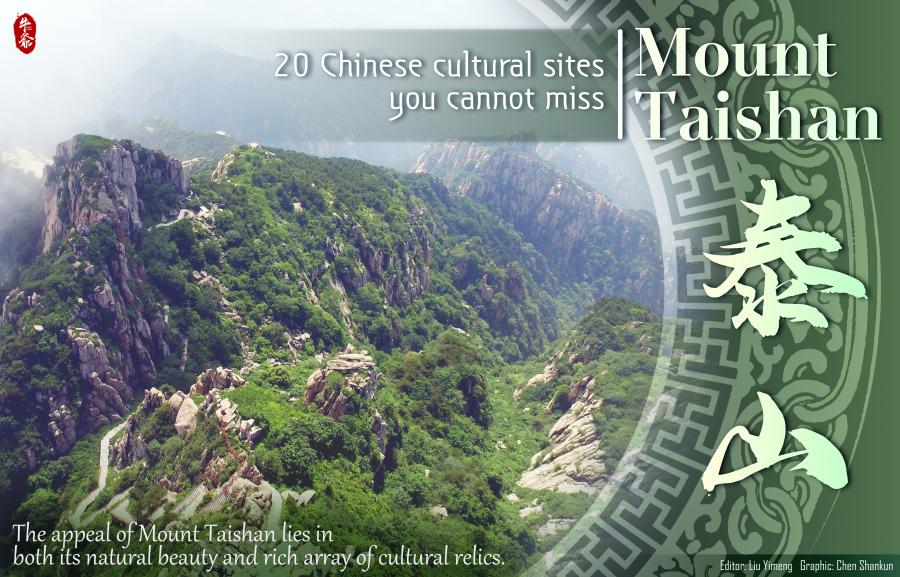 Mount Taishan, is one of the sacred mountains in China. The appeal of Mount Taishan lies in both its natural beauty and a rich array of cultural relics. It was listed as a World Cultural and Natural Heritage site by UNESCO in 1987.