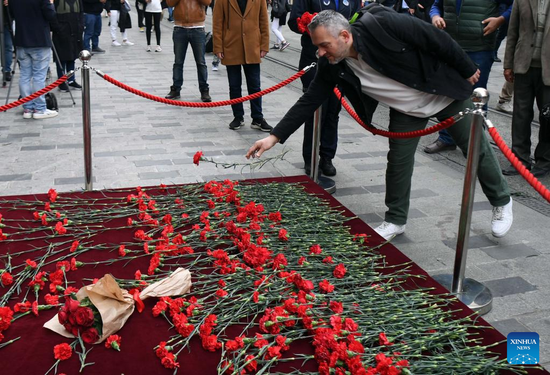 A citizen lays a flower to commemorate the victims of Sunday's terror attack on the Istiklal avenue near Taksim Square in Istanbul, Türkiye, Nov. 14, 2022. The busy avenue was hit by an explosion on Sunday afternoon, killing six and injuring 81. (Xinhua/Shadati)

Thousands of Turkish flags and bouquets of carnations turned Istanbul's busy Istiklal avenue in hues of red on Monday as the citizens commemorated the victims of Sunday's terror attack.

"We will heal our wounds quickly, and we will work together to continue the peace in our city," said Istanbul Mayor Ekrem Imamoglu as he visited shops and talked with tourists in the afternoon.

The busy avenue was hit by an explosion on Sunday afternoon, killing six and injuring 81. According to the governor's office, 24 are still in medical care, and two are in critical condition.

Sitting at the heart of the historic Beyoglu district, Istiklal avenue is an alluring destination for tourists and citizens alike. However, its heavy pedestrian traffic also makes it a vulnerable target for such attacks.

Turkish authorities confirmed the blast to be an act of terror, and the suspected assailant was found within several hours after a massive operation was launched.

The Istanbul Police Department said the suspect was a Syrian national under orders of the outlawed Kurdistan Workers' Party (PKK) and its offspring in Syria, the People's Protection Units (YPG). Both are listed as terror organizations by Türkiye.

Sunday's blast was not the only explosive attack on the avenue in recent memory. On March 19, 2016, an Islamic State militant detonated his suicide vest on the street, killing five people and wounding 36.