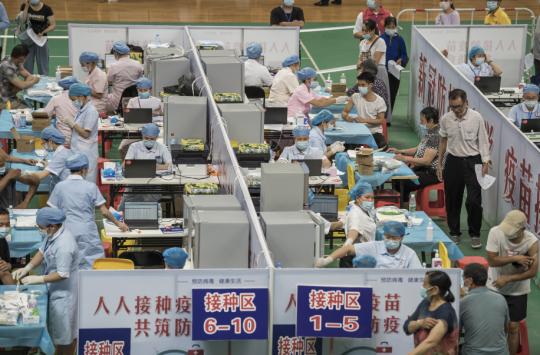 The authorities in Guangzhou, capital of Guangdong province, lost no time in implementing the latest COVID-19 policy modifications announced by the central government on Friday afternoon.

Less than four hours after the changes were unveiled, Guangzhou, which has seen a recent rise in local outbreaks of the disease, said it would implement the modifications and promptly reduce the quarantine period based on the new requirements.

By the following afternoon, more than 12,300 close contacts or inbound travelers who had been in centralized isolation facilities for five days and had tested negative, as well as some 16,500 secondary close contacts placed in quarantine, had been discharged.

The prompt action in the southern city, which saw daily new infections top 4,000 during the weekend, has impressed many netizens.

On Sina Weibo, two hashtags linked to the rapid action in Guangzhou had been viewed more than 250 million times by Sunday evening.

A Sina Weibo user with the handle Xuxuchanchan said: "The action taken by the city is very good and worth a thumbs-up. I hope other places follow suit soon."

The latest optimization of China's virus control policy — outlined in 20 measures ranging from new quarantine and contact tracing rules to prohibiting malpractices — has drawn widespread attention across society, with many pointing to the speed and depth of implementation in particular locations.

In Hubei province, Tan Xiaodong, a professor at Wuhan University's School of Public Health, said, "A feature of this round of adjustments is that detailed measures were revealed very quickly — only one day after a meeting of the Standing Committee of the Political Bureau of the Communist Party of China Central Committee on Thursday (that discussed the issue)."

He said many of the changes are clearly aimed at standardizing anti-virus approaches nationwide. "As new policies are conveyed across different levels of authority, we can foresee that local governments will enforce these measures very soon," Tan said during an online seminar.

Authorities at all levels have stressed that the latest adjustments do not constitute a relaxation of the resolve to control the virus.

On Sunday, new infections on the Chinese mainland rose to a fresh high in recent months, with 1,747 local confirmed infections and 14,325 local asymptomatic cases reported, according to the National Health Commission.

Lei Haichao, vice-minister of the commission, said at a news conference on Saturday, "Our constant upgrading of virus containment measures is not a relaxation of epidemic control work, but signals an emphasis on being more scientific and precise, so as to rein in outbreaks while minimizing their impact on economic and social development and daily lives."

Vice-Premier Sun Chunlan, stressing that the adjustments are aimed at coping with the epidemic in a more scientific and precise manner, said on Friday evening that local authorities should fully enforce the measures based on local conditions, and strengthen guidance and training for the new policies.

Lei said the top health authority has arranged online training sessions for disease control workers at different levels to gain an accurate understanding of the changes and accelerate their implementation.

Health experts estimate that reducing the centralized quarantine period for inbound travelers and close contacts from seven days to five will free up 30 percent of government isolation facilities nationwide, and that no longer tracing secondary close contacts will not increase the risk of the virus spreading.

An employee at a design studio in Nanjing, Jiangsu province, surnamed Xu, who volunteered as an anti-virus worker in her neighborhood, said on Sunday the quarantine period for close contacts had been reduced, as required.

"I also really appreciate the requirement to no longer identify secondary close contacts because of the low risk of positive cases being reported among them. This change can save a considerable amount of time and resources," Xu said.

Zhang Zhoubin, spokesman for the local center for disease control and prevention, said fast enforcement of such modifications is beneficial to Guangzhou's disease control situation.

"We can now dedicate our limited epidemiological investigation force to examining cases that bring a higher risk of community transmission, and devote more personnel to screening and community services to identify hidden cases more quickly," he said.

The new categorization of risk areas has been applied quickly in virus-hit locations.

Qin Jingna, a community official in Hohhot, capital of Inner Mongolia autonomous region, said the risk level in a community of about 5,400 residents was downgraded from high to low on Friday evening, and residents were allowed to go outdoors on Saturday.

"The most recent positive case found in the community was reported on Nov 3, with the patient transported to designated facilities on Nov 4," she said. "The old categorization would have labeled our area medium risk, but under the new rule, we are low risk.

"All the residents are happy with this news, and we will continue to enforce other virus containment measures mentioned in the notice," Qin said.

A resident surnamed Wang, who lives in another large community in Hohhot, said that in the past, she and her neighbors were required to stay indoors when positive cases were reported in just a few buildings scattered throughout the area.

"The new rule means that only those units with positive cases will be locked down," she said.

Wang Yong, a senior official in Hohhot, said on Saturday that high-risk areas that meet the requirements for lifting or lowering their categorization of risk should act quickly.

As of Saturday, at-risk neighborhoods in the city had been inspected under the new categorization rules, with about 150 high-risk residential complexes and 350 high-risk buildings reassessed as low risk.