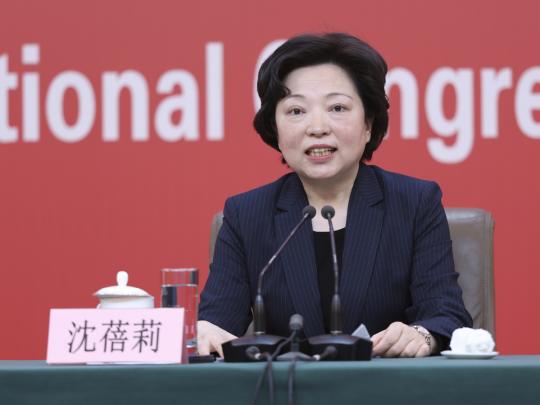 Shen Beili, vice-minister of the International Department of the CPC Central Committee, takes questions at news conference on the sidelines of the ongoing 20th National Congress of the Communist Party of China, Oct 20, 2022. (Photo/Xinhua)

The Communist Party of China will not point fingers at the internal affairs of political parties in other nations, nor will the Party seek to export the Chinese model or require other nations or parties to emulate its practice, an official said on Thursday.

Shen Beili, vice-minister of the International Department of the CPC Central Committee, told a news conference that the CPC will not accept the sanctimonious preaching or blindly borrow the political systems of other nations.

Shen, a delegate to the 20th CPC National Congress, said the Party will continue to carry out exchanges with political parties from other nation over national governance, jointly step up party building and bolster governance capacities.

She added that it is important for political parties of different nations to seek common ground while reserving differences and step up mutual learning, which is instrumental to promoting progress in human civilization.

Shen said political parties, whether being the ruling party or not, should treat each other as equals, respect each other and refrain from interfering in each other internal affairs, regardless of their history, number of members and strength.