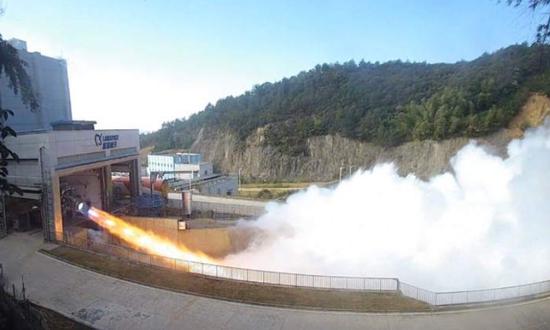 The engine, codenamed TQ-15A, has a vacuum thrust of up to 836 kilonewtons, and is the second stage main engine for the second batch of the Zhuque-2, a new methane-liquid oxygen fueled rocket capable of lifting a payload of 4 tons into a 500-kilometer Sun-synchronous orbit, or a payload of 6 tons into low Earth orbit.

Compared with the current layout of the rocket's second stage engine, the new engine has reduced the complexity of the engine system and achieved a total weight reduction of approximately 400 kilograms. It has also solved the problem of interference caused by turbine exhaust.

What's more, the TQ-15A engine has a 9 percent higher vacuum thrust and a wider thrust adjustment range, as well as the ability to start three times, significantly improving the adaptability of rocket launch missions.

Currently, the Zhuque-2 Y1 rocket has completed cryogenic fueling rehearsal, and the final assembly of the rocket is being carried out at Jiaxing LandSpace Center. Based on this, the research teams are developing iterations and optimizing the second batch of rockets to provide better performance and higher reliability.