China to fight at all costs for its sovereignty 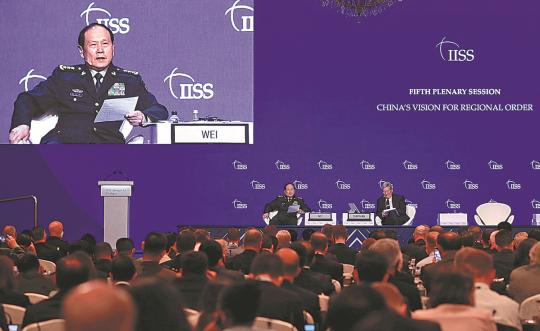 State Councilor and Defense Minister Wei Fenghe answers a question from a reporter on Sunday at the 19th Shangri-La Dialogue in Singapore. (LI XIAOWEI/FOR CHINA DAILY)

Defense minister: Taiwan question an internal affair, and unification of motherland is certain

China will have no choice but to go to war and fight to the end if anyone dares to separate Taiwan from the motherland, said State Councilor and Defense Minister General Wei Fenghe at the Shangri-La Dialogue in Singapore.

The minister made the remark on Sunday while delivering a keynote speech themed on China's vision for regional order, as well as on Friday during a meeting with U.S. Secretary of Defense Lloyd Austin.

"The Taiwan question is China's internal affairs and the unification of the motherland will absolutely be achieved," he said, adding that "Taiwan separatists" will definitely come to no good end and foreign inference will categorically fail.

"Peaceful reunification is the largest aspiration of the Chinese people, and we are willing to put our best efforts into that," Wei said. "China is quite unwilling to see a civil war like the American Civil War but will definitely smash any act of 'Taiwan independence'."

During the bilateral meeting on Friday, Wei stressed that the People's Liberation Army will relentlessly safeguard China's sovereignty and territorial integrity, and will definitely smash such act at any cost, even by going to war.

He said the recent U.S. announcement of arms sales to Taiwan had severely violated the one-China principle and the three China-U.S. joint communiques, seriously damaged China's sovereignty and security, and gravely jeopardized China-U.S. relations as well as peace and stability across the Taiwan Straits.

The meeting between Wei and Austin was the first time that the two top defense officials talked in person. Wei was in Singapore from Wednesday to Sunday to attend the 19th Shangri-La Dialogue and visit the Southeast Asian nation.

Senior Colonel Zhao Xiaozhuo, a researcher of international military relations at the PLA Academy of Military Science, said Wei's remarks indicate that China has drawn a crystal-clear red line for the U.S. for it to deal with issues related to China's core interests.

"We demand that the U.S. must not shout loudly that it wants 'peace and stability' on the one hand, while playing dirty tricks on the other," he said.

In a speech on Saturday, Austin accused China of threatening to undermine security, stability and prosperity in the so-called "Indo-Pacific" region. He also criticized what he called Beijing's "growing coercion"－a steady increase in "provocative and destabilizing military activity near Taiwan".

Zhou Bo, a senior fellow at the Center for International Security and Strategy at Tsinghua University, said Austin apparently aimed to exert pressure on China.

"The U.S. is now on purpose building a scenario that China is about to use force across the Straits," Zhou said. "But China has expressed time and again that it shall do its utmost with maximum sincerity to achieve a peaceful reunification. The use of force would be the last choice."

In his speech on Sunday, Wei said China-U.S. relations are now at a critical point.

"China opposes defining China-U.S. ties as competition," he said, adding that the U.S. will make historic and strategic mistakes if it regards China as a threat or rival or an enemy.

He urged the U.S. not to smear and try to contain China, interfere in the country's internal affairs or harm its interests.

During the meeting, both sides agreed that the two militaries should maintain high-level strategic communication, enhance strategic mutual trust, contain divergences and avoid turning them into confrontations or conflicts, according to the Ministry of National Defense.

China is willing to establish a "sound, stable great-power relationship" with the U.S., and that should be a shared goal for both sides, Wei said.

Zhao, the researcher, also stressed that it is of great importance that the two sides maintain direct, regular communication.

"Without communication and exchange, both sides will be prone to regarding each other as an enemy, and such antagonisms could easily slip into hostilities," he said. "Both sides must be aware that knowing each other's bottom line is the key to averting misjudgments."

Wei also responded to the U.S.' "Indo-Pacific" strategy by criticizing it as a way to "create small circles under the pretext of freedom and openness".

"The so-called Indo-Pacific strategy is designed to contain a country by coercing regional countries and hyping up conflicts against certain countries," Wei said. "We believe any kind of strategy should go with the trends of history and time and benefit the regional stability and countries here."

Zhao said the U.S. is attempting to maintain its hegemony in the Asia-Pacific region by creating a sense of insecurity in the region.

"The 'China threat' theory would be the best catalyst for a sense of insecurity that could make regional countries look toward the U.S.," he said, noting that the military is the best way for the U.S. to maintain its predominance in the Asia-Pacific.