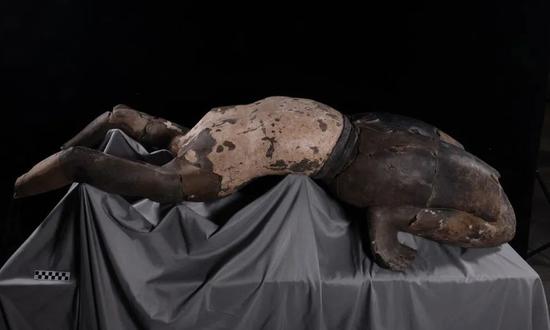 A Terracotta Warrior statue posing in a very unique position sparked people's interest on Chinese social media after its online debut on Saturday.

A photo of figure "No.28" was released by the Emperor Qinshihuang Mausoleum Site Museum in Xi'an, Northwest China's Shaanxi Province, on Saturday. Unlike other Terracotta Warriors statues found at the mausoleum, which are usually in a sitting or standing pose, "No.28" is kneeling on the ground and leaning backwards to its back that touches the ground.

The statue was discovered in mausoleum Ppit "K9901," which was first discovered in 1999. Nearly 30 figures were found in the pit. To date, 25 of them, including the figurine No.28, have also been restored.

It's worth noting that the statues unearthed from Pit K9901 have been different from the warrior and horse statues found in other pits. Archaeologists speculate that the pottery figurines in this pit depict the entertainers who would have amused the imperial court during the Qin Dynasty (221BC-206BC).

No.28 was discovered in a severely damaged state. Through nine months of efforts, the 84 fragments that were discovered were pieced together, although the statue is still missing parts of its hands and head.

The repaired statue measures 154 centimeters in length and weighs 101 kilograms.

The museum staffers noted that they used resin adhesive to reinforce the broken sections between its belly and back, however a crack between the mid-body and lower body has not yet been set.

In addition, the restorers also found some unique marks on No.28 left by the craftsman during its production. For example, three fingerprints can clearly be seen on the surface of the statue, providing an important clue for current research.

The Emperor Qinshihuang Mausoleum archaeological site still has many statues that have yet to be unearthed. According to current estimates, when all excavations  were completed, more than 6,000 pottery figurines and pottery horses would have been unearthed.