New U.S. act to 'have little impact' on HK 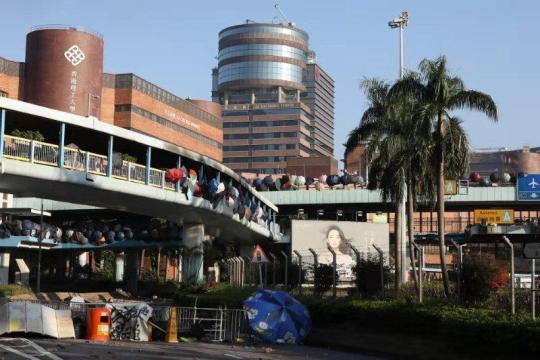 Umbrellas are seen left behind on the footbridge to act as shields for protesters, while a road barrier made from metal barricades and assorted trash is seen left on the road, outside Hong Kong Polytechnic University in the morning of Nov. 18, 2019. (Photo/China Daily)

Calling it a highly politically motivated piece of legislation, Zeman said that the law is misnamed because it basically deals with trade issues but not the "human rights" and "democracy" issues that its title suggests.

In an exclusive interview with China Daily, Zeman said the act "was pushed forward by some very anti-China U.S. senators, including Ted Cruz, Marco Rubio and Josh Hawley, who seized the opportunity to attack China at a time Hong Kong has gone through months of radical protests marred by violence, as well as the 2019 Hong Kong District Council elections".

"U.S. President Donald Trump was reluctant to sign the bill," Zeman said. "But he eventually signed it at the last minute to appease the senators of the Republican Party, which he belongs to, in the hope they would not vote for his impeachment, instigated by the Democratic Party," he said, referring to the Democrat-led U.S. House of Representatives' efforts to formally charge Trump with malfeasance in office.

Trump signed the bill into law last Wednesday. It commits the United States to supporting the protests in Hong Kong and requires sanctions and other diplomatic actions if Hong Kong－which has its own legal system－is judged to be insufficiently autonomous.

Commenting on the signing of the bill, economist Tim Harcourt said: "It's another speed bump along the way to friendlier relations" between Beijing and Washington. The JW Nevile Fellow in Economics at the University of New South Wales Business School said he doubted that the bill would have any significant impact on Hong Kong and its relationship with the U.S.

Zeman said he doesn't expect the new law to make much of a difference to Hong Kong in any case.

"The Hong Kong act will only have little impact on Hong Kong in the short term because Hong Kong remains a good place to do business, given its strengths, such as 'one country, two systems', judicial independence, and low its tax regime," he said.

"The U.S. will be unlikely to revoke Hong Kong's independent tariffs territory status, given that the U.S. reaps a favorable trade balance of about U.S.$33 billion every year. But if Hong Kong would ever lose the U.S. market, it can still survive because it has the vast mainland market behind it and can look to other foreign markets."

Zeman, who was born in what was then West Germany and is now a naturalized Chinese citizen, pointed out that U.S. culture is all about human rights, freedom and democracy. Yet U.S. citizens do not know much about matters outside their country because many of them have not left their country and rely only on news and social media, he said.

"Some media organizations in Hong Kong have strong political inclinations, and so their news reports are biased and incomplete," he said. "Coupled with the popularity of social media, fake news and rumors about what happened in Hong Kong and the ways the Hong Kong Police Force handled the violent protests were spread around the world very quickly," he said.

Zeman said the U.S. Congress should have sent people to Hong Kong to collect balanced, impartial views, but not just views from anti-government people in the other political camp. "For example, when Republican Senator Ted Cruz visited Hong Kong in mid-October, he said he didn't see any violence here," he said.

"Again, it is ridiculous for the U.S., a country which does not have the best human rights record, to criticize the human rights conditions in Hong Kong. In fact, Hong Kong ranked third in the Human Rights Index in 2018 co-compiled by the Cato Institute, while the U.S. was in 17th place."

In an article published by the U.S. magazine The Nation, Tobita Chow, director of Justice Is Global, and Jake Werner, a historian teaching at the University of Chicago, said that the bill's "China-versus-the-West" framing hurts progressive causes on both sides of the divide.

The bill is the latest expression of a binary that pits China against the West, according to the two scholars. U.S. political elites on both sides have embraced this narrative, in part for its usefulness in undermining the domestic demands for radical change that each faces.

On the U.S. side, members of the political establishment have seized on anti-China politics with the hope of co-opting the rising demands for change to aid efforts that will reinforce U.S. global hegemony.

As The Washington Post's David Ignatius put it, "Americans may be mistrustful of elites, but they also want to believe in something larger than themselves…. (The China challenge) can unite the country and summon disaffected Americans to a test on which their future livelihoods depend, quite literally."

"The national security establishment sees great-power competition with China as the top reason to expand the already bloated military budget," they added. "Many Democratic leaders are now hoping to outbid the GOP on anti-China measures, moving onto terrain that is tilted in favor of the GOP's white nationalist base."

The two scholars said that the act not only threatens progress in Hong Kong by strengthening divisions between protesters and mainlanders, but also includes measures aimed at turning Hong Kong into a tool of U.S. foreign policy, such as compelling it to help enforce U.S. sanctions against Iran.

They said the challenge for progressives is to construct an alternative that escapes the binary and redraws the lines of political confrontation, adding that there are abundant grounds for solidarity among the people of the Chinese mainland, Hong Kong, and the U.S. in the form of shared aspirations for a more equal, sustainable society.

"Our enemies are not other countries; they are the unaccountable elites and nationalist ideologues of all countries," they said.