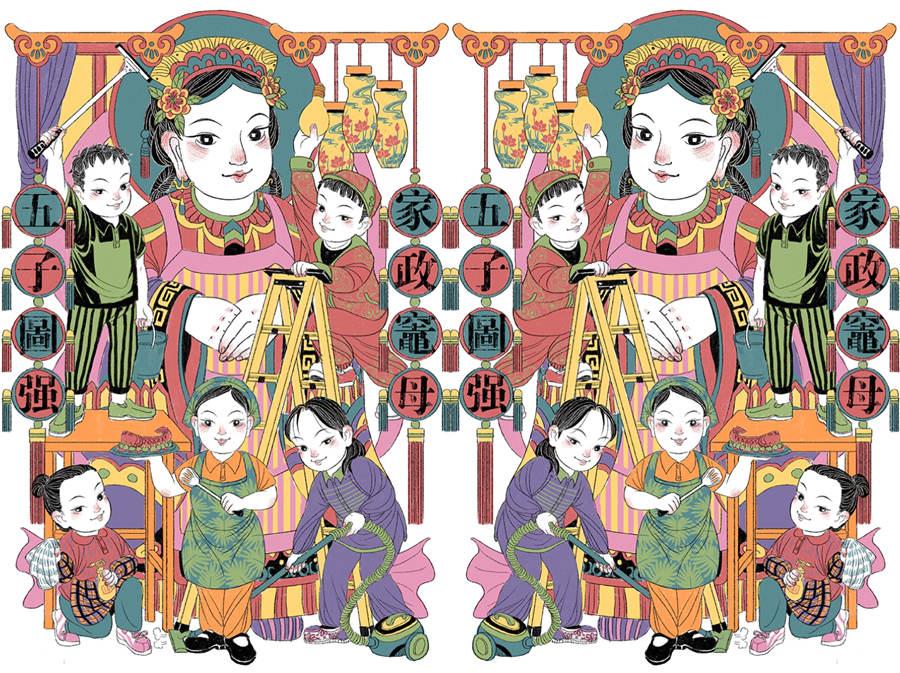 Neo-nianhua works, jointly created by young designers and nianhua artisans, were on display side-by-side with traditional nianhua pieces during the Conference on Nianhua's Inheritance and Development, held from Nov 23-24 in Weifang, East China's Shandong Province. (Photo/provided to chinadaily.com.cn)

Zhong Xinglin made a hard decision in early 2017— to quit working as a local news correspondent for the web edition of the People's Daily in Central China's Hunan Province.

Truly taking pride in her six-year stint at the influential media website, however, Zhong, was beckoned by her true calling to join her father's endeavor to revive nianhua.

Nianhua, aka Chinese New Year pictures, are a type of chromatic woodblock prints that boast a long history dating back to the Western Han Dynasty (206 BC-AD 24).

Zhong's family has been engaged in the nianhua-making business for more than a century.

However, "as Chinese society evolves at breakneck speed, nianhua, a typical token of a traditional way of life, is losing ground in contemporary life. Now it's my turn to keep the old art and craft thriving in the 21st century," Zhong told the audience at the opening ceremony of a conference on Chinese New Year pictures' inheritance and development, held from Nov 23-24 in Weifang, East China's Shandong Province. 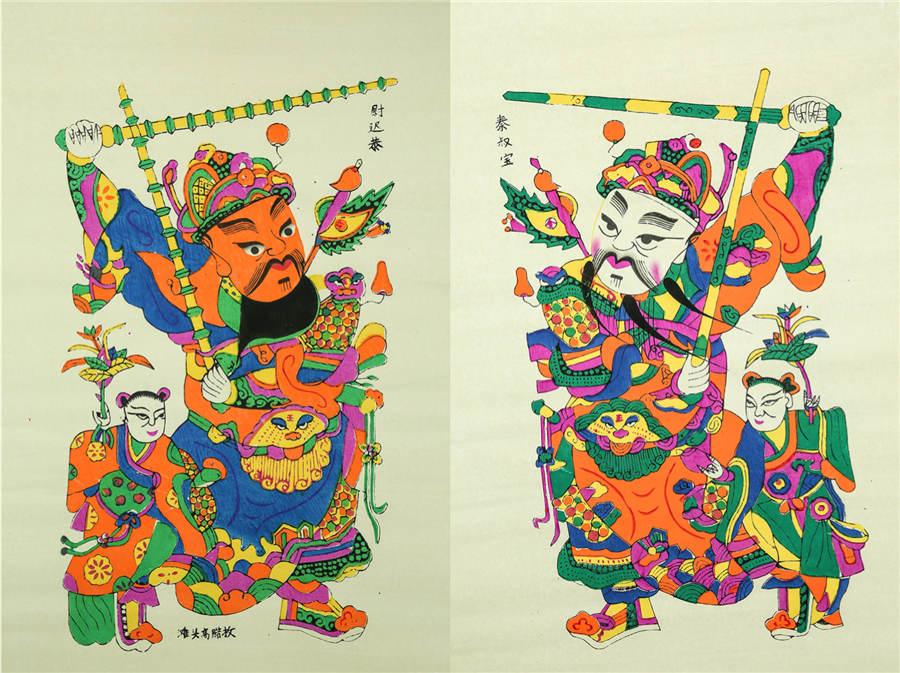 Apart from honing her nianhua-making skills, the media-savvy artisan has since catapulted Tantou nianhua, a variety of the famed Chinese intangible cultural heritage in her home province of Hunan, to stardom among young consumers across the country.

Both traditional products and modern spinoffs from the Zhong family's nianhua studio have been selling like hot cakes on social media, such as WeChat and TikTok.

"A steadily-growing number of followers are not only willing to buy Tantou nianhua products but also to learn nianhua-making skills. For me, that is very encouraging," said Zhong. "I am very optimistic about the future of nianhua." 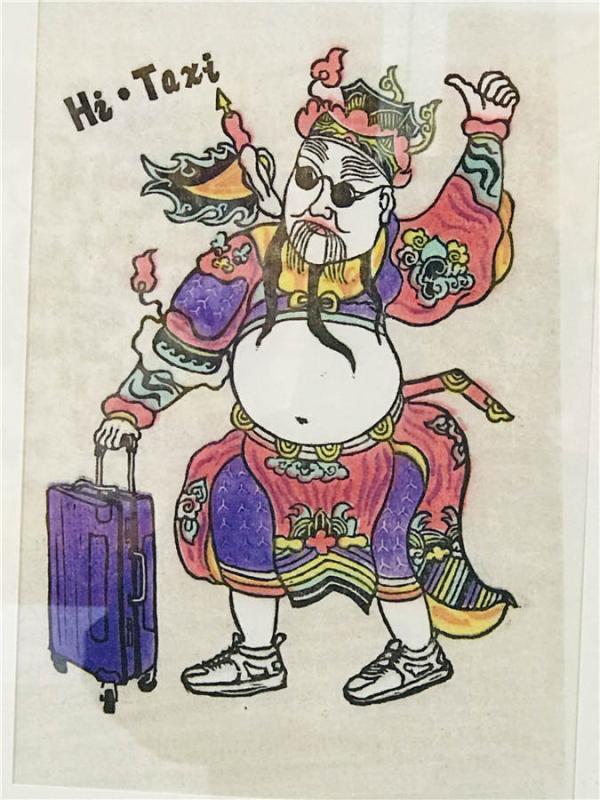 A piece of Neo-nianhua works, jointly created by young designers and nianhua artisans, is on display side-by-side with traditional nianhua pieces at the Conference on Nianhua's Inheritance and Development on Nov 24 in Weifang, East China's Shandong province. (Photo/provided to chinadaily.com.cn)

"I firmly believe that nianhua will enjoy a rebirth, gaining a foothold in contemporary life," said the 68-year-old master, a national-level nianhua inheritor, better known as a guardian of Fengxiang nianhua, a local variety of the Chinese New Year woodblock prints in Shaanxi.

Tai's family has been practicing the folk art since the early Ming Dynasty (1368-1644). As the only surviving 20th-generation inheritor of the art and craft, Tai has spent decades re-creating hundreds of traditional nianhua woodblocks, strictly in accordance with vintage New Year prints he found.

"Inheritance comes before innovation. It is my mission in life to rescue and recover traditional motifs, patterns and techniques. I am not interested in innovation. I'd rather leave it to young people," Tai said.

But Tai is happy to see that his son Tai Gaoyang, daughter-in-law Wang Yixuan, and daughter Tai Gaodi, have all joined in to promote nianhua.

Gaoyang and Yixuan concentrate on creating new products based on traditional nianhua motifs, and then market and sell them through e-commerce and social media platforms. 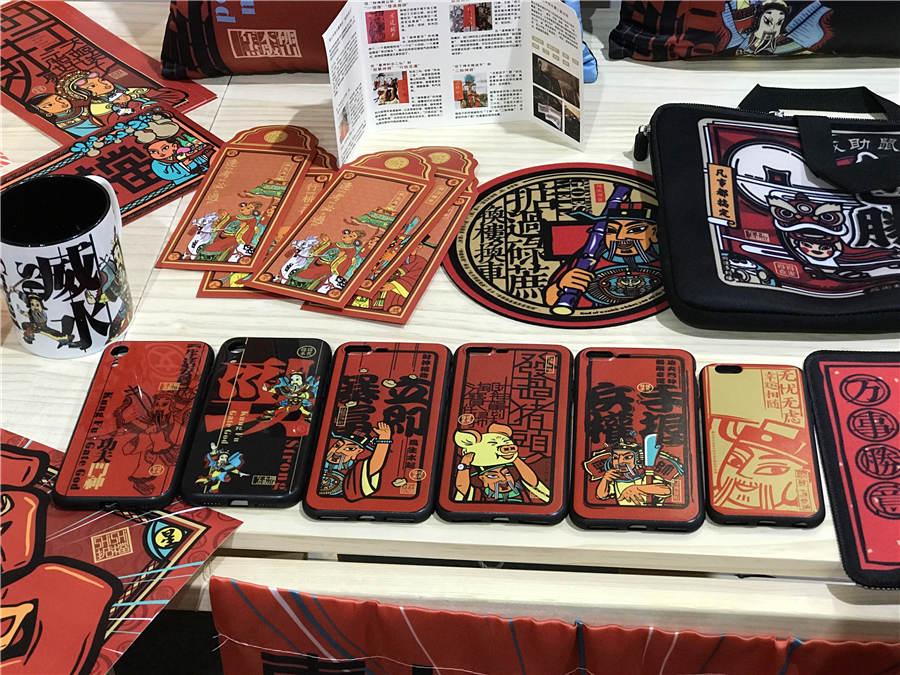 Meanwhile, Tai Gaodi, a nianhua researcher with the Chinese National Academy of Arts, is busying herself building up the nation's most inclusive nianhua database for academic and educational use.

Young designers, too, are making immense contributions to the revival of nianhua, said Wang Jian, a mass media researcher with Nanjing University, at the seminar on nianhua's new applications.

They have teamed up with nianhua artisans to create the so-called Neo-nianhua works and nianhua spinoffs, such as mouse pads, scarves, T-shirts, pillows, bags, stickers, calendars, and smart phone cases, he explained.

"These novel products are usually characterized by common scenes from daily life, and they have easily become an integral part of contemporary life,” said Wang.

People of different ages and from different areas are making joint efforts to revive nianhua. "Most importantly, more and more young people are engaging themselves in the creation and promotion of nianhua and as such, have injected new life into the millennium-old folk art," said Chang Huixue, managing director of wodsy.com, at the nianhua conference. 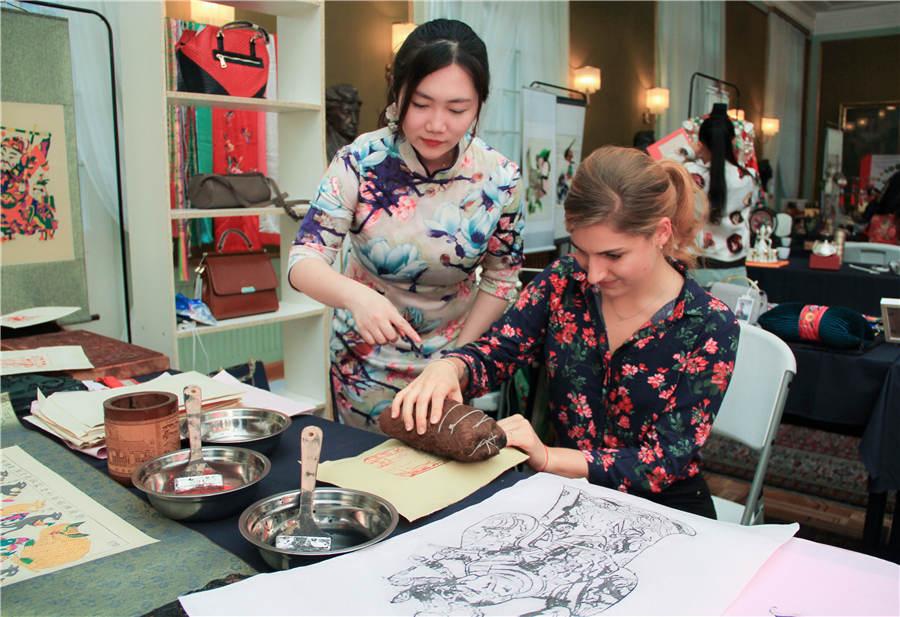 Nianhua artisan Zhong Xinglin introduces the traditional Chinese cultural heritage to a young woman during her visit to Warsaw in the summer of 2018. (Photo/provided to chinadaily.com.cn)

Affiliated with the China Cultural Media Group Co Ltd, wodsy.com is a portal specialized in promoting traditional Chinese skills and crafts, and a key co-organizer of the conference.

The conference featured three seminars on nianhua's creation and innovation, mass communication, and integration into contemporary life, a preparatory meeting attended by the founding members of the Chinese New Year Woodblock Prints Inheritance and Development Alliance, and a grand exhibition of traditional Chinese New Year Woodblock prints, neo-nianhua works and nianhua spinoffs from the hands of artisans and designers from different parts of the country.

The conference also unveiled a year-long campaign, supported by the Ministry of Culture and Tourism, to raise public awareness of cultural heritage in 2020 by publicizing master craftsmen, holding nianhua-making workshops, art fairs, and mounting nianhua exhibition tours around the nation. 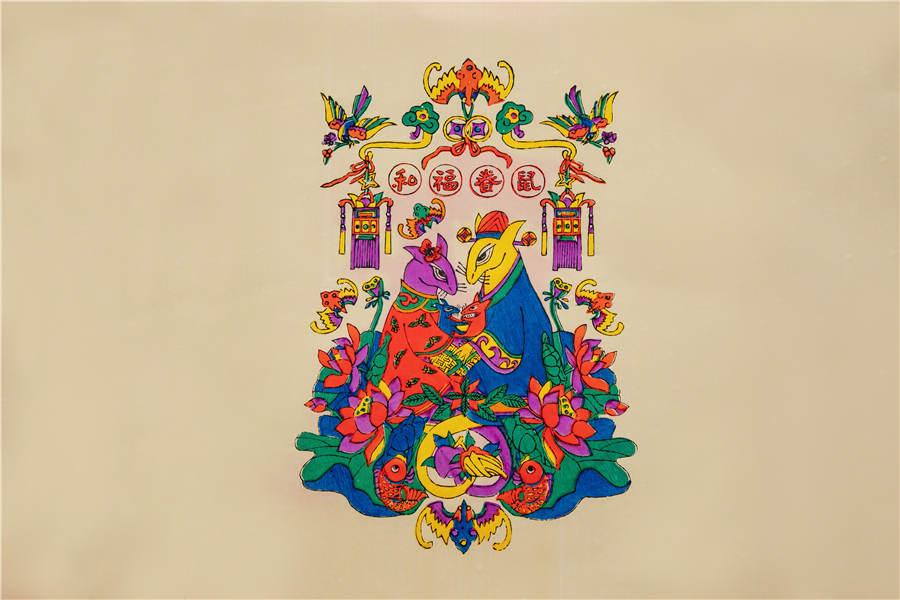 This Tantou nianhua work, depicting personified mice and symbolizing wealth and happiness, is soon to hit the market as the Chinese lunar year of the mouse will arrive in less than two months. It was shown during the conference on nianhua's inheritance and development, held from Nov 23-24 in Weifang, East China's Shandong Province. (Photo/provided to chinadaily.com.cn)

Xinghuozhe, a traditional Chinese equivalent of Zippo, sells like hot cakes on China's e-commerce and social media platforms. Young designers from the Gao Lamei Nianhua Studio have re-designed the traditional gadget, adding a USB interface, a rechargeable battery, and replacing the bamboo-made, cylinder-shaped case with one made of red sandalwood with carved images of the fortune gods, commonly seen in Tantou nianhua works from Central China's Hunan Province. (Photo/provided to chinadaily.com.cn)