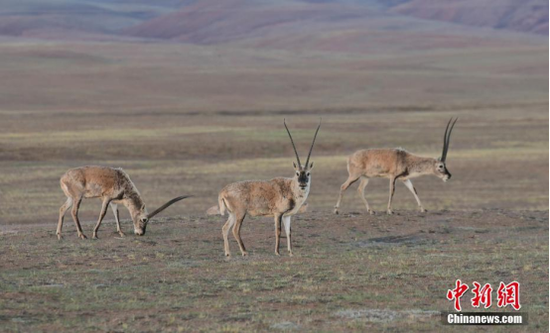 (ECNS) -- The status of Tibetan antelopes in China has been downgraded from "endangered" to "near-threatened" amid the country’s biodiversity restoration and poaching crackdown.

Following giant pandas, this is the second wild animal in China to be removed from the endangered species list.

The population of Tibetan antelopes in China has increased to an approximate 300,000 from less than 70,000 in the 1980s and 90s, according to a recent National Forestry and Grassland Administration statement.

Tibetan antelopes, under the first-class state protection in China, mainly inhabit the plateau region of Northwest China, including Altun Mountains of Xinjiang, Qiangtang National Nature Reserve in Tibet, and Qumahe in Qinghai Province.

As a foundation species in Hoh Xil of Qinghai and Qinghai-Tibet Plateau, Tibetan antelopes maintain the integrity of the biological chain, according to Qiupei Tashi, head of the Zhuonai Lake protection station in Sanjiangyuan National Park (SNP).