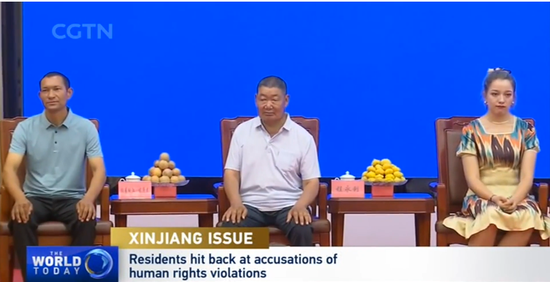 Residents of northwest China's Xinjiang Uygur Autonomous Region have hit back at accusations of human rights violations, saying some Western countries' claims of "genocide" or "forced labor" are fabricated.

At a press conference in Xinjiang's Kashgar on Monday, some residents shared how their lives have been improved over the past years, refuting Western media's alleged human rights abuses against ethnic minorities in the region.

"In 2010, I established a cherry cooperative with seven partners. Now we have 58 growers in our cooperative and the cherry farm has reached 180 hectares. Everyone can get a dividend of about 20,000 yuan (about $3,094) per year," said Turhun Ahmat, a resident of Shache County of Kashgar.

"People in my village are all willing to plant cherries because it's profitable. How can you say they are forced to work?" Turhun added.

Aliye Ablimit, another resident of Kashgar, shared her experience to rebut what some Western countries call "camps" in the region, saying the skills she learned at the vocational education and training center have helped her start her own business.

"After graduation, I became a tour guide for Kashgar Ancient City. And later, I turned my home into a Bed and Breakfast. Tourists love my house very much because of its Uygur style. All the rooms are fully booked these days. Now I have a monthly income of about 50,000 yuan," said Aliye.

An imam from the Id Kah Mosque – one of the landmarks of Kashgar – also said the claims of restricting religious freedom in Xinjiang are lies.

"China has attached great importance to the protection of Id Kah Mosque and has allocated more than 10 million yuan for repairs. In fact, the conditions of all mosques have been greatly improved. They've been equipped with electronic displays, computers, air conditioning, and other facilities to provide a better environment," said Mamat Juma, Imam of Id Kah Mosque.

Many Western nations have raised concerns about "forced labor" and human rights violations in Xinjiang, citing cotton farming and discriminatory policies against ethnic minorities. But local officials said the Western politicians are just trying to destabilize Xinjiang in a bid to hamper China's development.

They said they welcome people to travel to the region to see it for themselves, and learn more about the real situation in Xinjiang.