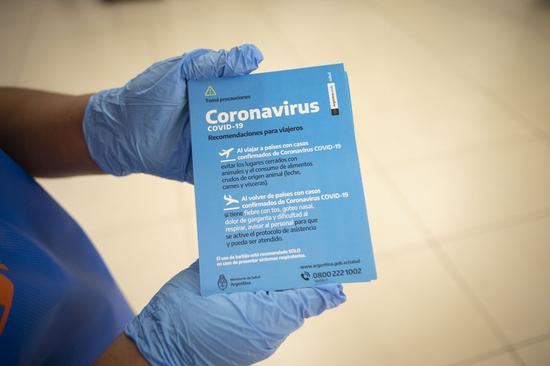 An employee from the Health Ministry shows a brochure for international arrival passengers at the Ministro Pistarini International Airport in Ezeiza, Argentina, March 12, 2020. (Xinhua/Martin Zabala)

Argentine authorities on Tuesday called on the public to "make more of an effort" to contain the COVID-19 pandemic or risk a return to stricter lockdown measures in the capital Buenos Aires and the Metropolitan Area (AMBA).

When lockdown measures were first launched on March 20, "we made a great effort, there was a great commitment on the part of the people, and we have to persuade them to return to that commitment and make more of an effort," Health Minister Gines Gonzalez Garcia said.

"I don't think this is going to be eternal, but we have to bring things to a stop. It could be very useful to stop a little, because there is a lot of circulating and we are at a critical moment," Gonzalez told local Mitre radio station.

Argentina's capital needs to intensify its efforts to avoid overwhelming the healthcare system, something it has so far managed to do, he said.

"If cases continue to rise, we will necessarily have to apply greater restrictions," Rodriguez told local media.

On Monday night, the country reported 2,146 daily new cases of infection, the largest single-day figure since the outbreak was detected here on March 3.

Argentina's President Alberto Fernandez is set to meet with Rodriguez and the governor of Buenos Aires province, Axel Kicillof, on Thursday to map out the next phase of pandemic strategy.