Man sentenced to death for murder of Shanghai schoolchildren 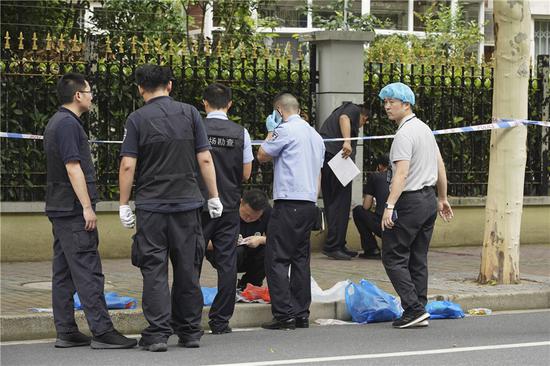 Police examine the site of a knife attack that occurred in downtown Shanghai leaving two boys dead and another boy and a parent wounded on June 28, 2018. (Gao Erqiang/China Daily)

The man who stabbed and killed two 10-year-old students in Shanghai was sentenced to death for murder by the Shanghai No. 1 Intermediate People's Court on Thursday.

On the morning of June 28, Huang Yichuan, a native of Shaoyang city, Hunan province, killed two boys near the gate of the Shanghai World Foreign Language Primary School on Pubei Road in Xuhui district in Shanghai. He also injured another boy and a woman.

The court, which heard the case on Dec 6, said that Huang, who was then 29, committed the crime as he was frustrated by problems at work. Although he was diagnosed with slight schizophrenia, the court said the diagnose was not enough to exempt him from punishment as he had planned to carry out the crime for a long time.

Huang traveled to Shanghai on June 6 and bought a kitchen knife at a supermarket on Jun 12, according to the court. It added that he visited several kindergartens and primary schools before deciding where to carry out the attack.