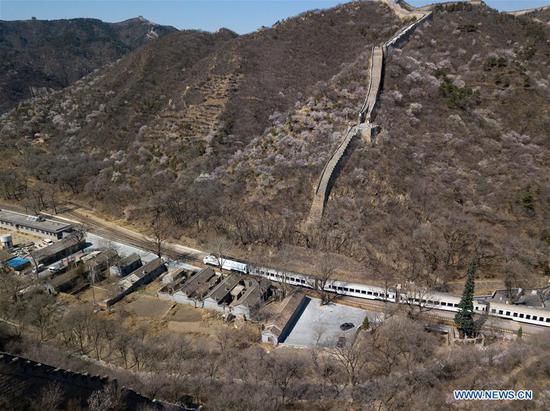 In this aerial photo taken on April 2, 2019, a Line S2 train of Beijing Suburban Railway (BSR) pulls out of Qinglongqiao station of the Beijing-Zhangjiakou railway in Beijing, capital of China. (Xinhua/Ju Huanzong)

Witnessing original speed of 35 kilometers per hour up to 350 today, the Beijing-Zhangjiakou railway, the first designed and built by Chinese, shows the development of the country's railways and economy.

Linking Beijing and the city of Zhangjiakou in north China's Hebei Province, the upgraded 100-year-old railway will play an important role in the transport for the 2022 Beijing Winter Olympics, which is co-hosted by the two cities.

The Beijing-Zhangjiakou railway was designed by Zhan Tianyou, known as the "father of China's railroad," and was opened in 1909 after four years of construction.

The construction of the railway was considered impossible at the time without foreign assistance. Zhan, with his colleagues, strived to complete its construction two years ahead of schedule, overcoming a series of problems in terrain and shortage of train power by building a zigzag railway that climbed upward, using two locomotives instead of one.

With a speed of 35 kilometers per hour more than a hundred years ago, the railway will be upgraded into a high-speed one that is nine times faster by the end of 2019.

There are 10 stations on the 174-kilometer-long high-speed railway connecting the two cities, which will also be linked with the subway lines in Beijing, serving as a crucial traffic line for the 2022 Beijing Winter Olympics.

The station of Qinghe, the departure station of the high-speed railway, will be another comprehensive transport hub in Beijing when it is put into use.

"We are using a lot of advanced equipments and technologies in the construction of the new high-speed railway, which I believe represents the rapid development of our country," said Li Ran, a member of the railway construction team.

"The railway not only reflects the economic development and the progress in modern science and technology of China, but also witnesses the unyielding and striving spirit of the Chinese people," said Yang Cunxin, the head of Qinglongqiao station, where Zhan was buried.

"A lot of people including university students visit here every spring in memory of Zhan," he added.

China's high-speed railways exceed 25,000 kilometers and are expected to reach 30,000 by 2020, covering over 80 percent of cities with a population of more than 1 million.