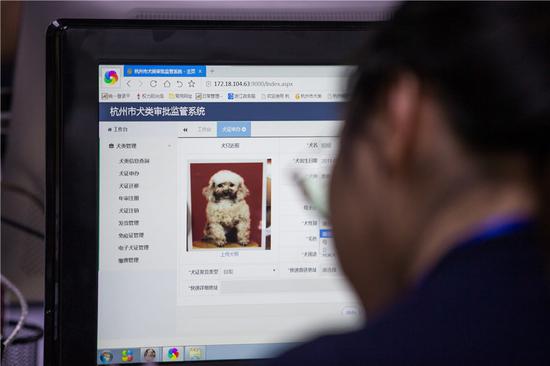 A member of staff at a service center checks the details of a dog registered on Hangzhou's digital information platform. (CHEN ZHONGQIU/FOR CHINA DAILY])

A police officer surnamed Zhou who was manning the checkpoint said officers ask dog owners to show their license, and if they fail to do so the animal will be impounded temporarily. Officers also check to ensure dogs are properly leashed and owners have cleaned up any droppings.

"The bridge was a favorite place for dog walkers, but many unleashed dogs ran around the area, which really affected visitors and damaged the city's image," he said.

According to Jia, Hawaii's owner, responsible dog lovers understand that the regulations are intended to curb unruly behavior, so they have few objections. However, several of the rules seem illogical.

"Some just don't make sense, particularly the time restrictions," she said. "Many people enjoy a morning workout before 7 am and many children play outside after 7 pm, so the ban won't reduce contact between people and dogs."

She said that when the crackdown was introduced, she was concerned that her dog might be taken away by law enforcement officers because the Shiba Inu is not clearly listed as a permitted breed, so she had not dared to apply for a license.

However, she later discovered that the Shiba Inu is small enough to meet the city's size criteria, so she obtained a license.

That's not the case for Fan, who can either hide his golden retriever or send it outside the urban area.

"I support the legal licensing of dogs, but I am very puzzled why breeds such as golden retrievers and border collies, which are internationally recognized as mild and submissive, have been excluded (from the list of approved breeds). I think the government should regulate dog owners instead of putting restrictions on breeds," he said.

Zhu, from the Zhejiang Small Animal Protection Association, said the regulations being enforced were introduced in 2004 in an attempt to restrict the number of dogs, but given the sheer number of pets and the sector's rapid development, the rules are outdated and no longer suitable.

Moreover, there is no comprehensive animal protection law to serve as a legal basis for the government to enforce, he added.

He believes the rules are necessary because they help maintain sanitary standards, make the public feel safer and raise dog owners' awareness, but the government and lawmakers need to amend the regulations and make greater provision for the animals.

"We have proposed to the authorities that as long as owners keep their dogs in a civilized way, the animals should be allowed the right to sunlight, and restrictions should be applied according to the classifications of aggressiveness for each breed, rather than size," he said.

"Moreover, management of dog ownership should be based on systematic top-to-bottom regulations for the entire industry. The development of the industry overall should serve as the foundation of animal welfare and protection," he said.