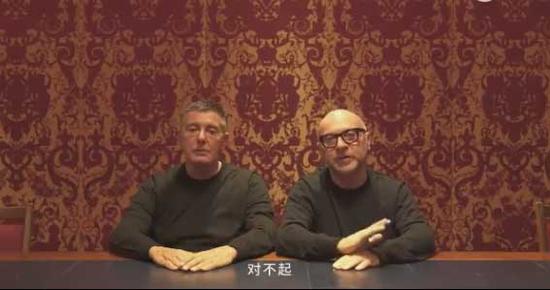 Domenico Dolce and Stefano Gabbana, designers and founders of Italian luxury brand Dolce & Gabbana, made an apology in a short video posted on its official Sina Weibo account regarding recent outrage over a racist ad and subsequent remarks.

The duo expressed hope that China could forgive them for their poor understanding of culture. The apology was made in Italian, and the pair said "sorry" in Chinese, duibuqi, together at the end.

Here is the full transcript:

Dolce: Over the past few days we have thought long and hard with great sadness about everything that has happened and what we have caused in your country and we are very sorry. Our families have always taught us to respect the various cultures in all the world and this is why we want to ask for your forgiveness if we have made mistakes in interpreting yours.

Gabbana: We also want to apologize to all of the many Chinese people throughout the world. We take this apology very seriously as well as this message.

Dolce: We have always been in love with China. We've visited it and seen many of its cities. We love your culture and we certainly have much to learn. That is why we are sorry if we made mistakes in the way we expressed ourselves.

Gabbana: We will never forget this experience and it will certainly never happen again. In fact we will work to do things better. We will respect the Chinese culture in every way possible. From the bottom of our hearts, we ask for forgiveness. 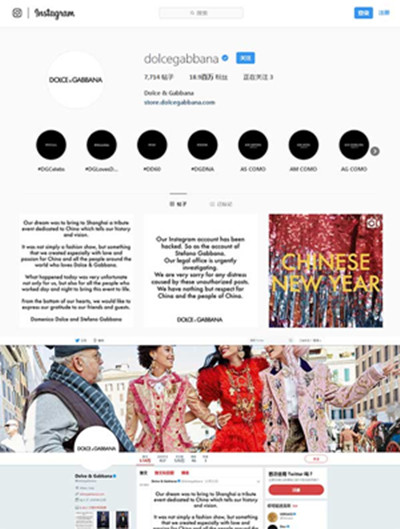 A screen capture of Instagram (top) and Twitter pages (bottom) of Dolce and Gabbana as of 3:30 p.m. Beijing time. (Photo/Instagram)

As of 3:30 p.m. Beijing time, the apology video has not yet been posted on the official Instagram and Twitter accounts of Dolce and Gabbana.

The controversial clip, originally posted by D&G on its Instagram and Sina Weibo accounts, shows a female Asian model in a glitzy red Dolce & Gabbana dress using chopsticks to eat pizza and other Italian foods.

It was intended to promote the Shanghai show, but sparked outcry in China for its insensitivity, in part because of the model awkwardly attempting to eat Western food with chopsticks.

Early Wednesday morning, in a chat on Instagram between a netizen named "michaelatranova" and someone using the personal account of Gabbana, the latter appeared to make insulting references toward China and Chinese people.

Dolce & Gabbana posted an announcement on its Weibo account saying: "Our Instagram account has been hacked. So has the account of Stefano Gabbana. Our legal office is urgently investigating. We are sorry for any distress caused by these unauthorized posts. We have nothing but respect for China and the people of China."

Indignation arose among Chinese netizens, with many calling on Wednesday for the show to be canceled. A-list celebrities such as Chen Kun, Huang Xiaoming and Li Bingbing said they would not attend.