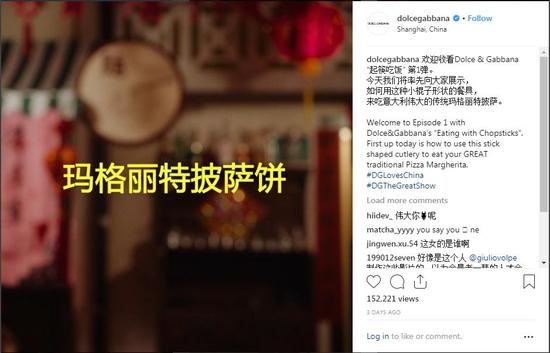 One of the three episodes posted on Instagram. /Screenshot

Italian fashion brand Dolce&Gabbana (D&G) was accused of racial discrimination against Chinese people and culture as it released three trailers on social media to its show held in Shanghai on Wednesday night.

The trailer series, titled “Eating with Chopsticks” consists of three episodes and is dubbed in Chinese with a young Asian-looking lady wearing D&G jewels and showing how to use a traditional wooden pair of chopsticks to eat western foods. 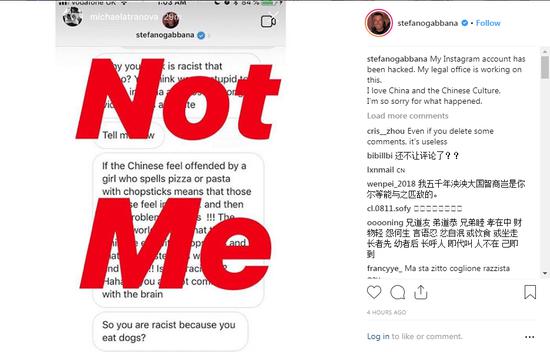 Stefano Gabbana, a D&G designer responded to the insulting remarks which had been accused of being sent by him. /Screenshot

In the trailers, the lady demonstrates how to use chopsticks to eat margherita pizza, Sicilian cannoli and Italian spaghetti, but the voiceovers ignited people's anger as the chopsticks are described as the little stick-shaped cutlery and pliers while the margherita pizza was described with the word “great” in one episode.

“I demand D&G marketing team take off these short video series immediately from all your social media platforms. D&G, I feel sad that such a global brand like you can make such a disgusting and nasty advertisement. You must know your influence in the fashion industry and in the world as your advertisement goes viral on social media,” Instagram user jessicapan0915 shared her thoughts on the marketing and was concerned that the descriptions in the videos would have misled people who are not familiar with Chinese culture. 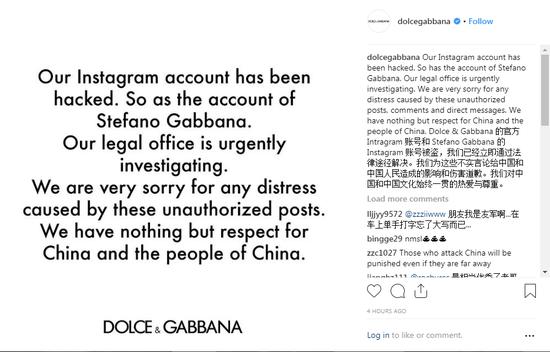 Dolce&Gabbana made a statement. /Screenshot

The complaints about the content in the trailers have been continuously coming out in the comments sections of D&G posts, not only limited in the analogies since the series started being posted on Sunday. Some netizens also accused D&G of suggesting that Chinese people don't know how to eat western foods.

“We know how to eat these foods. You can almost find every cuisine in China, and we love to explore new food and culture. We don't eat everything with chopsticks. To eat spaghetti, you either use a fork and roll the noodle like that or use chopsticks PROPERLY,” a user called li_birda commented and also criticized the young lady in the videos for her expressions like she has never seen any of the foods before in her life.

Screenshots filled with insulting comments on Chinese people by Dolce&Gabbana designer Stefano Gabbana were also seen spreading on social media, but Gabbana has denied the remarks from his account and said his account was hacked.

Following Stefano's statement, Dolce&Gabbana also published a statement on Instagram and China's Weibo hours ahead of the show, clarifying that both their accounts were hacked and their legal officers were urgently investigating. Along with the statement, Dolce&Gabbana emphasized its respect for China and the people of China through the three episodes that still remain on its social media accounts.

On Chinese social media, the hashtags of “DG Designer” and “D&G” immediately hit the ranks of hot searching with netizens starting to boycott the brand.

“Accounts being hacked is an all-purpose excuse,” @Xiaoyuyideyigui criticized the designer as many netizens questioned if his account was indeed hacked.

Chinese celebrities, like Zhang Ziyi, Li Bingbing and Huang Xiaoming, have also shown their antipathy towards the content presented in the three video clips, and confirmed that they would not be attending the show.

“The motherland is above everything. We are proud and confident of Chinese culture and spirit. Undoubtedly, you [China] are the best,” singer and actor Kerry Wang Junkai said on his Weibo post and stated that he would not be present at the show.

According to Dolce&Gabbana's Weibo account, the show, scheduled at 8:00 p.m., has been canceled, but it did not give any explanation to the cancellation.