Eco-unfriendly vehicles banned from base camp of world's highest peak 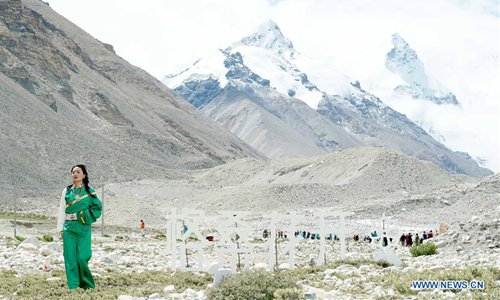 A model presents a creation during a folk costume show at the 5,200-meter-high base camp of the world's highest peak Qomolangma, in southwest China's Tibet Autonomous Region, Aug. 18, 2018. (Xinhua/Chen Jianli)

Eco-unfriendly tourist transport vehicles will be banned from base camp starting 2019 at Mount Qomolangma, known to the Western world as Mt. Everest, in a Tibetan county government environmental campaign.

Locals who live below the poverty line will be employed as tour guides and drivers of new electric golf-style buggies to and from the camp, China Tibet Online reported Saturday, citing the government of Tingri county, Xigaze, Southwest China's Tibet Autonomous Region.

"It will help reduce pollution in the area and raise the income of locals," Wangqiong, deputy head of Tingri county, was quoted as saying.

"This area has a fragile environment and its natural conditions have limited  processing capabilities of trash and sewage, which must be handled very carefully."

More than 100,000 people, including 40,000 mountaineers and hikers, visited the Everest Base Camp and nearby area in 2017, the Xinhua News Agency reported in March.

Some 2.26 tons of human feces, one ton of mountaineering trash and 5.24 tons of household waste have been removed from the world's highest peak since April.

A professional cleaning company has been hired to maintain the area and every visitor will receive trash bags to promote cleanup, Wangqiong told the news site.

Electric buggies are used in scenic spots across China to reduce emissions, Zhang Shangzheng, dean of the tourism management department at Anhui University, told the Global Times on Sunday.

"If local government chooses charging piles to solve the power issue, such piles must be carefully installed at places that do not influence the water or damage the beautiful scenery," he said.