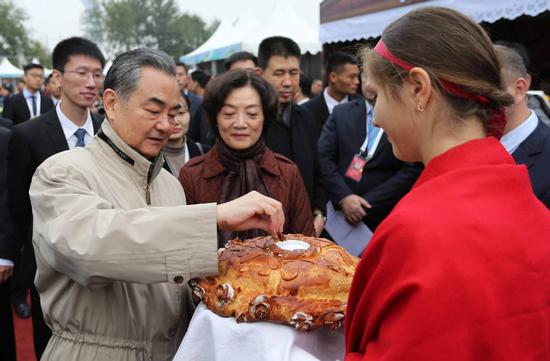 Some hearing-impaired children in poverty-stricken areas in Guizhou province will be able to hear thanks to the caring of foreign diplomats in Beijing.

On Sunday, "Love knows no borders", an international charity fair on the theme "Hear love of the world" and coordinated by Qian Wei, the wife of State Councilor and Foreign Minister Wang Yi, raised more than 6 million yuan ($865,900). The money will be used to get cochlear implants for the children.

Ninety foreign embassies and representative offices of international organizations in China displayed and sold food, handicrafts and cultural products representative of their countries at the event, which more than 10,000 people visited.

In a speech at the opening ceremony, Qian thanked the foreign diplomats and caring people for their long-term care and support for China's poverty alleviation work.

"We have brought love and hope to those in need," she said.

It was the 10th anniversary of the charity fair.

Over the past years, more than 26 million yuan has been raised and channeled to villagers, children and the disabled in poor mountain areas of Yunnan, Gansu, Henan and Guizhou provinces and the Guangxi Zhuang autonomous region.

"I feel happy, honored and satisfied to be a part of the charity bazaar and joining hands with China for alleviation of poverty," said Sughra Habib, second secretary of Pakistan's embassy, which had four booths to display their products.

Sunday was the first time the embassy of Dominican Republic attended the event－the Caribbean island nation established diplomatic relations with China this year. Its embassy prepared bread pudding, rice and chicken products as well as some handicrafts for the occasion.

"It is a great experience to contribute to this great initiative and an opportunity to showcase our culture and strengthen the ties between our countries," said Yamila Fersobe, minister-counsellor of the embassy of Dominican Republic.

Pan Qiwei, a 22-year-old college student who came to attend the event from Nanjing, Jiangsu province, by train, said the event offered him a great opportunity to see the cultures and customs of different countries.