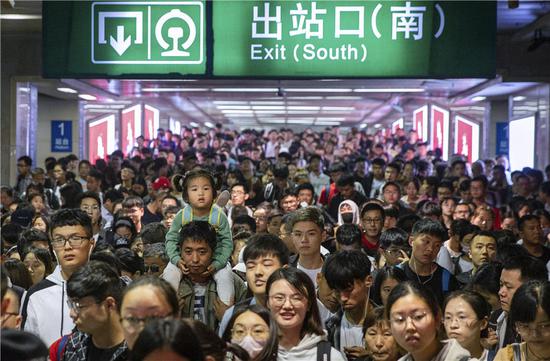 Nearly 730 million trips were made by Chinese travelers within China over the seven-day National Day holiday, a year-on-year increase of 9.43 percent, thanks to cheaper tickets and higher-quality travel services, according to the Ministry of Culture and Tourism.

The figure was even more impressive given the fact that National Day 2017 overlapped with Mid-Autumn Festival.

The ministry said that 981 State-level attractions lowered ticket prices, while 74 were free to the public prior to the travel boom during the break.

Visits to Yellow Crane Tower, Wudang Mountain and Shennongjia National Nature Reserve in Hubei province saw a sharp increase over the holiday due to lower prices, while the Three Gorges Dam was rated as one of the most popular attractions among venues offering free entry.

Gao Hong, a manager of the company running the Mount Laojun tourist venue, said that it's not easy for travelers to have meals at the mountain given the climbing required and fickle weather conditions.

"The attraction is crowded during holidays, making it harder for visitors to have meals. We felt embarrassed seeing travelers consume just bread and water," he said.

"Now our food is cooked by our staff members and it's not a burden for us."

The ministry said that quality travel services were also available to travelers during the holiday.

Four new transfer points opened during the seven-day break in Yangzhou to make it easier for travelers to park cars and transfer to buses.

Tourist attractions, according to the ministry, received 122 million visits on just the first day of the seven-day break, up 7.54 percent year-on-year, with revenue increasing by 7.19 percent to 103 billion yuan.

The flag-raising ceremony at Tian'anmen Square in Beijing attracted about 145,000 travelers on Oct 1, the 69th anniversary of the founding of the People's Republic of China, according to the Beijing Commission of Tourism Development.