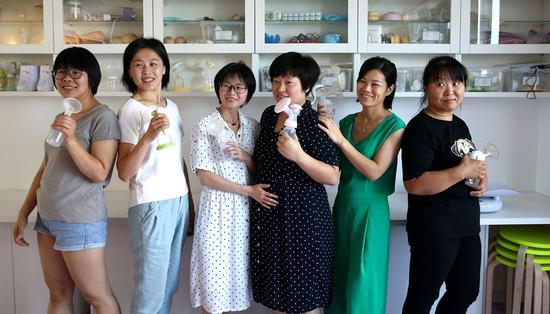 Teacher Li Jing and new mothers display breastfeeding pumps at a course run by the Homebase for Breastfeeding Mothers, which helps to promote the practice. (Photos By Zou Hong / China Daily)

An increasing number of new moms are reviving the traditional approach to neonatal nutrition, but they need more help from professionals.

Although China has seen greater awareness of the benefits of breastfeeding in recent years, the country still lacks qualified professionals and support staff members.

Now, to meet the rise in demand, authorities are formulating guidelines to provide training programs and favorable policies.

The recruitment and training of a greater number of support staff members is designed to prevent new mothers from falling prey to a variety of illnesses and common problems that have arisen as a result of the shortfall in qualified postnatal practitioners.

"If there is one thing that would prevent me from having another baby, it would be the horrible memory of breastfeeding for eight months after giving birth," said Lu Lu, whose son will be 3 in August.

The boy was born prematurely at 35 weeks, so he was sent to the neonatal intensive care unit for special treatment immediately after birth. Unfortunately for Lu, the lack of early skin-to-skin contact between mother and child resulted in her mammary glands malfunctioning and failing to produce enough milk.

The day after she gave birth, Lu's breasts became swollen and tender.

"A TCM (traditional Chinese medicine) doctor placed scalding hot towels on my breasts, saying it was a common way of treating the condition, which usually occurs in the first days after delivery when the mammary glands begin to work," the 33-year-old recalled. Lu knew little about health matters, so she didn't object.

However, two days later, the pain in her breasts intensified and she realized that the treatment was making her condition worse.

In response, Lu's mother introduced her to a retired doctor who was well-known for giving neonatal nursing lectures in Beijing.

"She gave me a breast massage, which is said to be very useful," Lu said. "But my breasts soon became as hard as rocks and I also developed a fever after the treatment."

It wasn't until Lu attended the Haidian Maternal and Child Health Hospital in Beijing, which houses the country's leading breast surgery clinic, that she was diagnosed with severe peracute mastitis - sudden onset, severe inflammation of the breast - which may have partly been a result of the inappropriate treatments she had undergone. The condition, which can cause fever, acute soreness and even abscesses, was so serious that she had to be hospitalized.

"During pregnancy, I conducted lots of research on delivery and infant nursing, but not on breastfeeding," Lu said. "It happened so unexpectedly; I thought breastfeeding was instinctive and most mothers would not have problems feeding their baby."

During the eight months Lu breastfed her son, the problem recurred about 10 times.

"All the suffering I endured resulted in other problems, such as depression, which, in turn, made breastfeeding much more difficult and a very unhappy experience," she said.

In March, Zhu Dan, a well-known TV anchor, used her Sina Weibo account to relate similar problems she had while breastfeeding.

She also complained about the shortage of qualified breastfeeding consultants, and urged women to share the contact details of consultants who had treated them. Within a day, the post had received more than 3,000 replies.

According to Wang Shicui, a self-styled breastfeeding consultant in Beijing, many new mothers experience similar problems.

"Not every mother will encounter severe conditions such as mastitis, but nearly all will have common breastfeeding challenges, ranging from low milk supply or engorgement (swollen breasts) to an impaired milk ejection reflex or the baby refusing to breastfeed. That's why our service is so popular."

Wang has no medical training; instead she gained experience through years of practice, and has become proficient at helping new mothers produce sufficient quantities of milk and relieving mammary duct blockage through massage. Despite her lack of qualifications, Wang's methods have often been successful and she always has a steady stream of patients.

"In our social circle, certificates mean nothing but reputation," she said, adding that most of her clients are introduced by women who have benefited from her services.

Her door-to-door service costs 500 yuan ($78) for a two-hour session, excluding the transportation fee. It's a profitable business, and in the past six years, Wang's consultations and apprentice training program have enabled her to buy two large apartments in Beijing.

While Wang is well-respected, some unqualified practitioners may be endangering their clients, according to many observers.

"China has an extreme shortage of professional consultants, and many mothers are grasping at phony solutions that might put them at higher risk," said Dong Mingzhu, the mother of twin girls, who co-founded the Homebase for Breastfeeding Mothers, one of China's biggest internet platforms for the dissemination of knowledge about mother and baby care.

Shortly after giving birth, Dong realized she had problems producing enough milk so she looked for a solution on the internet.

"I was astonished to discover that lots of Chinese mothers were having problems breastfeeding, but there were few sources of reliable information available," she recalled.

In response, she began collecting clinical research papers and studies, and sharing them via internet platforms. More women joined her activities, and in 2009 the Homebase was founded by tens of thousands of women from more than 100 cities across China. Nearly 10 years later, its website and accounts on Sina Weibo and WeChat have more than 1 million members.