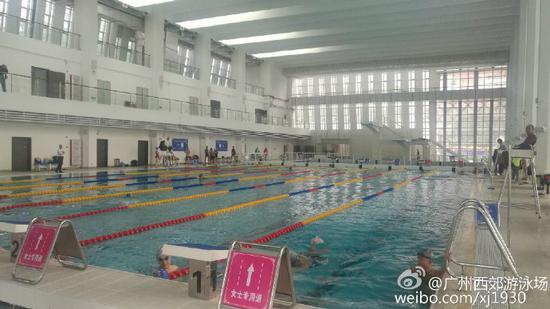 A swimming pool in Guangzhou, south China's Guangdong Province, has catered one of its lanes exclusively to female swimmers, a move to accommodate females who are less experienced in the water, according to the manager of the Xijiao pool.

The number of female lanes will be given based on the proportion of female swimmers in the pool, the facility said in a report by the Southern Metropolis News.

The decision of “putting female swimmers first” came as a similar “tribute” to the female-only subway carriages in Guangzhou launched in 2017 to curb sexual harassment. However, the primary goal for setting up the female lane was to answer the needs of female amateur swimmers this time, as some of them complained about often getting kicked by others.

“Some female swimmers often get kicked by males who swim faster than them, and some tend to be held back and hesitant to go in the water when the pool is too crowded. So we took the idea behind the female-only subway cars and came up with a similar way to address this issue,” The manager explained.

The arrangement has received claps from swimmers of both sexes. Many female and male swimmers both said they felt mutually benefited for adding a lane for females. While more and more new swimmers are coming to the pool, the lifeguard would tell the males to use the other lanes accessible to everyone.

“I’m not a very fast swimmer so I might slow down others behind me in normal lanes. Some females can still go to the other lane, but if you’re slow you can just swim here...” said Zhang, a female swimmer told the Southern Metropolis News. Huang, a male swimmer, also said he’s supportive as he thinks some males may swim faster than some females do.

Despite the support from the swimmers, the enforcement of the female-only space has opened up a series of debate on social media about gender equality from different perspectives.

Some netizens argue that the lane is restrictive and discriminatory towards females.