Shenzhou-12 spaceship's capsules to cause no harm during reentry: official 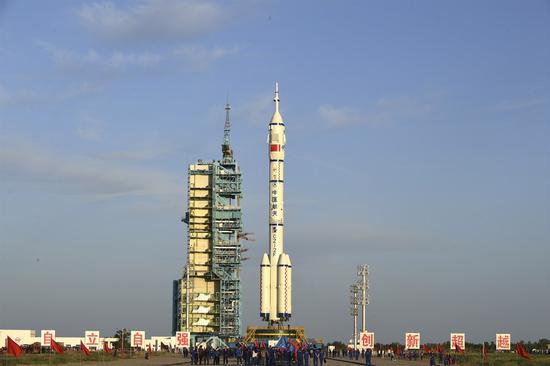 Photo shows the combination of the Shenzhou-12 manned spaceship and a Long March-2F carrier rocket after it was transferred to the launching area of Jiuquan Satellite Launch Center in northwest China, June 9, 2021. (Photo by Wang Jiangbo/Xinhua)

The propulsion and orbital capsules of the Shenzhou-12 manned spaceship will burn up during their reentry into the atmosphere, causing no harm to the ground, the China Manned Space Agency (CMSA) said on Wednesday.

The Shenzhou-12 spaceship, with three astronauts aboard, is expected to be launched on Thursday morning from the Jiuquan Satellite Launch Center in northwest China. The crew will stay in orbit for three months for the construction of China's space station.

Thursday's launch will be carried out with a Long March-2F carrier rocket.

Ji Qiming, assistant to the director of the CMSA, told a press conference on Wednesday that the majority of the components of the last stages of carrier rockets will reenter the atmosphere and burn up upon reentry, with an "extremely low possibility" of causing harm to the aviation activities and ground.

It is also a common practice currently in the world, he said in response to safety concerns over spacecraft wreckage and space debris.

"We have been closely tracking and monitoring the reentry situation of the last stages of the Long March-5B Y2 and Long March-7 Y3 carrier rockets in the previous launches, and published related orbital parameters, reentry time and landing areas in a timely manner," Ji said.

He said the cargo spacecraft Tianzhou-2, which was launched on May 29 for the construction of the space station, will be deorbited after completing the mission and burn up during reentry, with minimum wreckage to fall into the South Pacific Ocean.

Ji also noted that China has been committed to the peaceful use of outer space, and is willing to engage in broader international cooperation in man-made spacecraft wreckage and space debris issues to ensure the sustainability of the outer space activities in the long term.