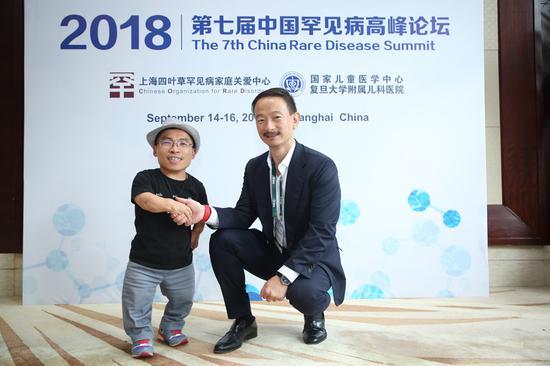 Global biotechnology firm Shire has vowed to introduce at least eight new therapies to China in the next five years, according to a senior official at the company.

"First and foremost, we'll continue to be an active listener and partner to the rare disease community in the country and help improve the diagnosis of such diseases," said Peter Fang, head of Asia Pacific and acting China General Manager at Shire, an Ireland-based company serving patients with rare diseases and specialized conditions, in an exclusive interview with China Daily on Sunday during the 7th China Rare Disease Summit in Shanghai.

"Another important way to respond to the partnership is to bring in more therapies. With the new guidelines provided by the Chinese government recently, we're optimistic that we can now seek the approval of marketing earlier than in the past. This would result in quicker access to rare disease therapies."

There are currently more than 16 million patients suffering from rare diseases in China. Each year, more than 200,000 Chinese children are born with such diseases, and around 30 percent of them do not live past five years.

The therapy that Shire has for hemophilia, a rare bleeding disorder, is one of the leading treatments for the condition in China today.

In May, Chinese authorities released a list which included 121 diseases, and a central government meeting also confirmed the expedited review and approval process for innovative medicines, representing a milestone in the prioritizing of rare disease care in the country.