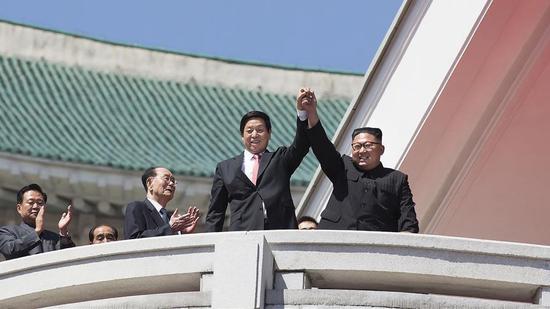 Kim Jong Un, leader of the Democratic People's Republic of Korea (DPRK), thanked Chinese President Xi Jinping for sending a special representative to Pyongyang for the 70th anniversary of the founding of the DPRK earlier this month, vowing to strengthen the country's friendship with China, Korean Central News Agency (KCNA) reported on Sunday.

"I will join hands with President Xi Jinping to work actively to further develop the relations and friendship and continue close cooperation," Kim said.

Li attended activities marking the 70th anniversary of the founding of the DPRK, met with Kim twice, and presented a signed letter from Xi to the DPRK leader.

Xi said in the letter that the DPRK has made extraordinary achievements in the course of socialist construction in the past 70 years, adding that it is an unswerving policy of the CPC and the Chinese government to safeguard, consolidate and develop China-DPRK relations.

Xi said that he and Kim had reached important consensus during their three meetings this year, opening a new chapter in the development of China-DPRK relations.

Xi said he is willing to work with Kim to strengthen the guidance of China-DPRK relations, implement the important consensus reached by the two leaders and push for greater progress in bilateral ties.

The DPRK leader visited China three times this year, in March, May and June respectively.

According to the KCNA report, Kim expressed his "deep gratitude" for China's congratulations on the anniversary. He stressed that Li's visit made him and people in the DPRK feel closer and friendlier towards the Chinese.

The two countries' relations have been developing according to the needs of the new era, Kim noted.

Commenting on Li's visit to the DPRK, Chinese Foreign Ministry spokesman Geng Shuang said the visit showcased the great importance China attaches to its relationship with the DPRK and represented China's warm congratulations to the DPRK's 70th founding anniversary.

"As a friendly neighbor of the DPRK, China stands ready to consolidate friendship with the DPRK and support the DPRK in improving its economy and people's livelihood," Geng said at a regular press briefing on September 10.

China remains committed to the denuclearization of the Korean Peninsula and to upholding peace and stability on the peninsula, he reiterated.