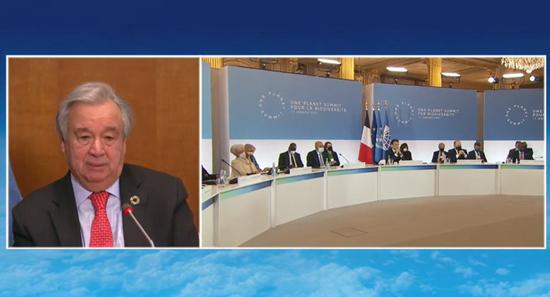 United Nations Secretary-General Antonio Guterres on Monday called for greater efforts to protect biodiversity and step up climate action, saying the process of recovery from the coronavirus pandemic offers the chance to "change course, and put humanity on a path on which it is not in conflict with nature."

Addressing world leaders at the One Planet Summit, the UN chief outlined the consequences of abusing Earth and its resources.

"We have been poisoning air, land and water - and filling oceans with plastics. Now, nature is striking back: temperatures are reaching record highs, biodiversity is collapsing, deserts are spreading, (and) fires, floods and hurricanes are more frequent and extreme," he said.

"We are extremely fragile," Guterres warned.

Combined with the devastating effects of COVID-19 and its socio-economic fallout, the UN chief reminded everyone that "as we rebuild, we cannot revert to the old normal."

"Pandemic recovery is our chance to change course. With smart policies and the right investments, we can chart a path that brings health to all, revives economies and builds resilience and rescues biodiversity," he said.

According to the World Economic Forum, emerging business opportunities across nature could create 191 million jobs by 2030, he added.

At the same time, with a financing gap of 711 billion U.S. dollars per year until 2030 to meet global biodiversity targets, increased and sustained financing will be crucial to transition away from polluting sectors, Guterres said.

"The time has come to ... align public and private financial flows with the Paris Agreement commitments and the Sustainable Development Goals and integrate the goal of carbon neutrality into all economic and fiscal decisions."

The UN chief also urged support for the most vulnerable, who are already suffering the effects of climate change, such as the least developed countries and small island developing states.

"Everyone must do much more ... We begin a new year under the sign of hope. Together, let us seize the opportunity to build a safer, fairer and more sustainable world," he added.

Organized by the French government in partnership with the United Nations and the World Bank, the One Planet Summit brought together world leaders to commit action to protect and restore bio-diversity. Due to the coronavirus outbreak, the event was largely virtual.