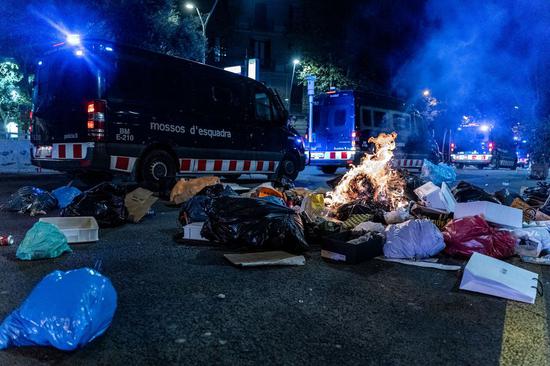 Trash is set on fire by Catalan pro-independence demonstrators near the headquarters of the Spanish National Police force in Barcelona, Spain, on Oct. 26, 2019. (Photo by Joan Gosa/Xinhua)

Hard confrontations between protesters and the police have returned to central Barcelona over the weekend.

At least three were detained and 44 injured during the pro-independence protests in the city in the Catalonia region of northeast Spain, according to local securities.

Although the situation was calmer than last weekend's riots, fears of continued waves of violence have greatly dimmed the beautiful sight of the Mediterranean tourist city.

An estimated number of over 350,000 protesters took to the streets in Barcelona over the weekend, in protest against the prison sentences given to nine Catalan political and social leaders on Oct. 14 for their roles in the independence referendum held in the region in 2017, which was declared illegal by the Spanish Constitutional Court.

The pro-independent demonstrators rallied in Marina Street on Saturday afternoon, linking the landmark La Sagrada Familia to the city's beaches.

Tense atmosphere loomed with police cars shuttling through with sounding sirens, helicopters hovering, and temporary checkpoints and barricades being set up.

Police presence was even heavier in Plaza Urquinaona, a principal square in central Barcelona, where riot vans were piling up nearby streets.

The square witnessed some of the fiercest clashes a week ago between radical pro-independence activists and local policemen, which have left some 200 injured, according to local media.

Traces and marks of the violence remained clear -- the glasses of the shops were broken, vicious slogans against the police were on the walls, grounds were burnt black, and pavements were hammered to pieces.

Worried about the flaring tensions, some locals had to close their shops earlier. Jose Perez, a 25-year-old waiter at Boscata Cafe at the corner of the square, was one of them.

Fearing of further damage by the rioters, Perez closed the cafe early at 7:00 p.m. in these days.

He showed Xinhua some video footages of the riots, in which many masked young men were throwing stones at the police and the shop windows, and setting garbage bins on fire.

"These violent acts are so ridiculous. I saw many of the rioters are youths, and they are making violence just for violence. Their acts show no respect for other's life," Perez said.

The tense atmosphere in the city has weighed heavily on local tourism and cultural activities.

Some local travel guides told Xinhua that they saw fewer tourists on the streets than usual at this time of year, and had to alter their plans in the city and cancel most of the activities when night falls.

According to a preliminary estimation by trade and tourism association Barcelona Oberta, stores and restaurants in the Catalan capital experienced a drop in sales of 30-50 percent.

A 26-year-old souvenir booth runner, who only gave his name as Timojin, said he saw fewer senior travelers, especially from the Nordic countries and Japan, at this time of year, and he had to close his shop in downtown Barcelona in the evening.

"Violence harmed the country's image, and the bad image can go viral. The tourists will feel unsecured and they're not coming, and we're losing money," Timojin said.

"The government has to tell that people have right to express their opinions, but they don't have the right to damage the city," Timojin said.

"They throw everything at our windows. Eggs, rocks and cans," said Ronald Pagcaliwagan, a waiter at the restaurant.

"And our business is affected, no one will compensate us. We usually sell 40 to 60 menus a day but now it's nothing," Pagcaliwagan said.

According to government figures, more than 600 people have been injured after the protests erupted, among which 367 were civilians. Besides, 289 police officers were also reportedly hurt.

The majority of pro-independence demonstrators, as well as many pro-unity locals, are now calling on the rioters to stop violence and follow the rule of law.

Dolyna Gomez Calzado, one of the demonstrators, said that violence should have no place in solving political problems.

Pro-unity politician Salvador Illa Roca, secretary of the Socialists' Party of Catalonia, said that the violent protests have broken the rule of law, which cannot be tolerated.

"Spain is a full democracy and there is a rule of law here and you cannot break the rule of law," said Roca.

"All over the world there is no democracy without the rule of law," he said, adding that the rule of law and public space must be respected and the violent protest fell out of scope.

He called on all parties in Catalonia to solve the problem in Catalonia in the spirit of mutual respect, and seek common ground in the future to help maintain and improve the autonomy of the region.