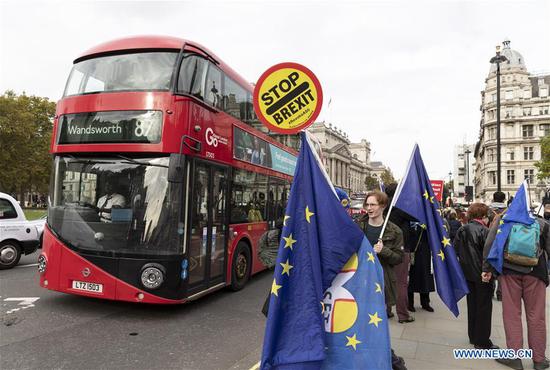 A bus passes by anti-Brexit protesters outside the Houses of Parliament in London, Britain, on Oct. 28, 2019. The British House of Commons on Monday voted against a government motion calling for an early general election on Dec. 12. (Xinhua/Han Yan)

British Prime Minister Boris Johnson lost his bid on Monday to call a snap general election on Dec. 12 as a way of ending the Brexit impasse.

The House of Commons voted by 299 against 70 in favor of an election, but the government failed to win a two-thirds majority, meaning Johnson's bid for an election was lost.

Johnson knew that his strategy needed at least 434 votes to win.

With the main opposition Labour Party against backing his election call, Downing Street did not expect success for Johnson in the vote. The result showed that almost half of Labour MPs abstained from voting.

After the decision was announced, Johnson told MPs that the government would on later Monday give notice of a new short parliamentary bill to pave the way for a general election on Dec. 12, using a different legal process.

That bill would only need a simple majority of MPs, but will still face a tough journey through parliament, even though the Liberal Democrats and the Scottish National Party say they would support an election, though on a different date, Dec. 9.

Labour leader Jeremy Corbyn said he would look at the new bill, but wants the Conservative government to remove any prospect of a no-deal Brexit before his party would support it.

He said there was a widespread view that the parliament has run its course and is not capable of delivering on the priorities of the people.

Johnson also launched an attack on Corbyn, accusing him of wanting to frustrate the wishes of the people. "He has run out of excuses," said Johnson.

Johnson called on EU member states to make clear that a further extension after Jan. 31 is not possible.

"This is plenty of time to ratify our deal. It will avoid this parliament simply extending our membership again and again," Johnson said.

The decision on Monday means MPs are likely to hold a new debate in the coming days to decide on a general election.